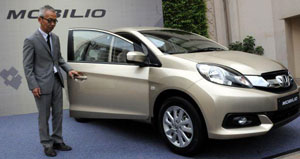 Honda Motor Co, which has recently increased its manufacturing capacity in India, expects to step up exports during the year, especially to South Africa.

Honda Cars India Ltd, the Indian arm of the Japanese automaker, has two manufacturing units in the country-one near Greater Noida in Uttar Pradesh and the other in Tapukara, Rajasthan. These plants have a combined installed capacity of 2,40,000 units.

The company is hopeful of exporting at least 9,000 units in the current fiscal, up from 6,000 vehicles last year.

Besides, Honda has managed to increase the localisation level in India to 87 per cent in the case of diesel vehicles and 93 per cent for petrol cars, said Shigeru Yamazaki, Senior Vice-President and Director, Honda Cars India.

“With two manufacturing facilities, depending upon the demand from other markets, we hope to increase exports.

“However, the prime focus is on catering to the domestic market,” he said.

“The company had a growth of 83 per cent last year and 14 per cent so far this year, and we hope to sustain this during the year with the launch of the Mobilio (multi-utility vehicle) in a segment where the company was not present in the country,” Yamazaki said.

The company expects to achieve a sales target of 3,00,000 vehicles in a couple of years. The launch of the Brio hatchback and the Amaze and the new City sedans has created an excitement in the market and the Mobilio is expected to sustain the growth-momentum.

It has received over 10,000 bookings so far. The company expects to roll out the new Jazz early next year.