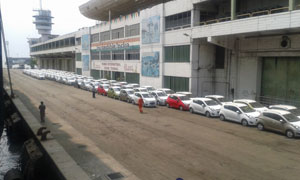 In a bid to better utilize its installed production capacity, GM India has commenced vehicle exports.

The Chevrolet Beat (called as the Spark in overseas markets) is the first made-in-India model by the automaker to be exported. The initial shipment of 140 Left Hand Drive units have left for Chile from the Mumbai Port Trust of Maharashtra and is expected to reach the South American nation in a few weeks.

GM’s newly appointed global CEO Ms. Mary Barra rolled out the first export-specific Beat at the company’s Talegaon plant on her visit to India in the second week of September.

Speaking on the occasion, Mr. Arvind Saxena, President and Managing Director, GM India said that the company will ship cars to Chile on a monthly basis. He added that more export markets will be identified in the future to improve the capacity utilization.

With an installed capacity of 1,70,000 cars and 1,60,000 engines per year, GM’s Talegaon plant is being heavily underutilized owing to poor demand for the Beat and Sail twins. In the previous fiscal year, GM used up just 28 percent of its Indian capacity, making it the least productive automaker.