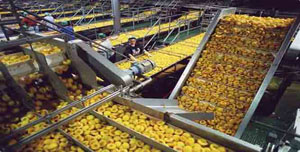 Indian food processing sector is likely to grow at the rate of over 10 per cent from 2015 onwards on back of increase in investment from private sector, according to a study.

Currently, the sector is growing at an average rate of 8.4 per cent.

The study jointly conducted by PHD Chamber and Technopak said the private sector is committed to invest in the expansion of their manufacturing units in the food processing sector, especially after the call of 'Make in India', given by Prime Minister Narendra Modi.

"Food processing industry is likely to register a consistent growth rate of over 10 per cent from 2015 onwards in view of its emerging potential, in which the private sector in this segment has already begun to invest to realize its impending worth," the study added.

The study titled as 'India : World's Emerging Food Leader' have projected that its food processing sector, which ranks at fifth presently world over in terms of production, growth, consumption and export is likely to reach at USD 194 billion by end of 2015.

In 2012-13, India registered a 63 per cent growth in the exports of agricultural products and processing foods which would naturally multiply in times to come, he added.