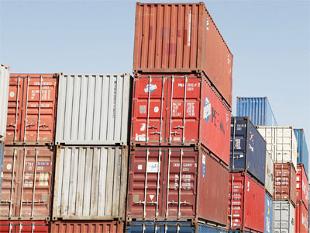 NEW DELHI: The government has fixed an export target of $340 billion for the current fiscal, Commerce and Industry Minister Nirmala Sitharaman said in a written reply to the Rajya Sabha on Wednesday.

Growth rate of exports entered the negative zone after a gap of six months, declining 5.04 per cent in October due to a dip in shipments from engineering, pharma and gems and jewellery.

In the previous fiscal, exports had registered a growth of 4.7 per cent at $314.4 billion.

Japan and the US contributed 1.84 per cent and 13.75 per cent respectively to total exports during April-September period of the current year, the Minister said.

An aggressive product promotion strategy for high value items that have a strong manufacturing base is the main focus of the overall growth strategy.

According to the Minister, the government-identified focus sectors for exports include, electronics, automobiles, leather, gems and jewellery and textile to boost shipments.

Top ten export destinations for India in the first half of the fiscal include the US, UAE, Saudi Arabia, Hong Kong, China, Singapore, the UK, Brazil, Germany and the Netherlands.