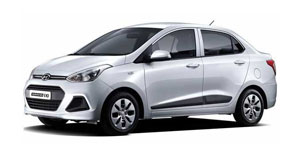 Hyundai revealed in India a game changer, the Grand i10 and based on that the sub-4 metre sedan - the Xcent. While the Grand i10 has been raking in the business for the Korean car manufacturer, the Xcent too has worked well here, so now they're taking it to other markets.

Hyundai Mexico has revealed the Grand i10 for the local market. The car is basically the Xcent which is sold in India and not the hatchback after which it is named. The car will be manufactured at the company's Chennai plant and will be exported to the South American market. The car that will be exported will get the same 1.2-litre petrol engine that produces 85bhp.

While the current crop will be fitted with a 5-speed manual transmission, the Xcent/Grand i10(Mexico) with an automatic gearbox will be ready for export next year. The India version already comes with a 4-speed automatic transmission and so it won't be difficult task to transfer the benefit of the Xcent with an auto-box to other markets.