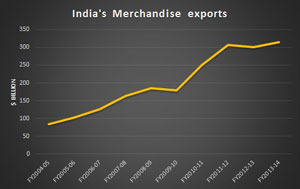 India plans to focus on its strengths and on labour intensive sectors to push total exports to over $900 billion in the next five years, a target that is almost double the total exports of $464 billion recorded in FY2013-14. This translates into a CAGR of approximately 14%, and is expected to improve India’s share of global exports to above 3% by FY2019.

Nirmala Sitharaman, Minister of State (Independent Charge) in the Ministry of Commerce & Industry, informed the Parliament today that the new export strategy will help India’s exports improve. She said that the long-term vision for India’s export sector revolves around the promotion of high value items. “An aggressive product promotion strategy for high value items that have a strong manufacturing base is the main focus of the overall growth strategy,” she said.

The Modi-led government’s market strategy is to retain India’s share in existing markets, move up the value chain for exports to developed countries, enter new markets and expand the export basket with newer products. “Focus of the strategy is to penetrate into the markets in Asia (including ASEAN), Africa and Latin America to strengthen our presence in newly opened up markets. At the same time our aim would be to deepen engagement in the older markets.” The government also plans to build a “Made in India” brand for important exports.

Under India’s new strategy, sectors like pharmaceuticals, electronics, automobiles, IT, environmental products are likely to see a boost in coming years. Sitharaman said that the government will plan programmes to improve product diversification and value-addition in labour-intensive sectors such as leather, gems & jewellery and textiles. Earlier this year, Rajeev Kher, India’s Commerce Secretary, had told The Dollar Business that agro processed food and high-end engineering are also important sectors that can help India’s exports grow in future.

Sitharaman also said that the government has taken some initiatives to help improve the Ease of Doing Business in India, such as de-licencing, environment and forest clearance, registration with Employees Provident Fund Organization (EPFO) and security clearances.