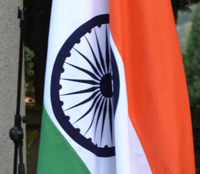 India has informed the UN General Assembly that it will boost investment in industrial, economic and social sectors in Africa. Senior counsellor at India’s UN Mission Amit Narang said on Friday that the main aim of the South Asian country is to help the 54-nation continent alleviate poverty through economic development.

Narang stressed: “Scaled-up investments in infrastructure, both economic and social, as well as in productive capacity for industrial development are needed. This is an area of priority for India’s partnership with Africa as well.” Speaking at the UNGA session on New Partnership for Africa’s Development (NEPAD), he also said: “Sustained and robust inclusive economic growth is indispensable for eradicating poverty and therefore also a central policy objective.”

According to Narang, India believes that broad-based and equitable economic growth will allow the African countries to reduce poverty and integrate into the global economy in a better way. The Indian official insisted that India has finalised its plan after considering Africa’s own development priorities.

Narang claimed that the Indo-African trade has experienced a 31% growth annually between 2005 and 2011 and the current volume of bilateral trade is over USD 72 billion. Meanwhile, UN Secretary General Ban Ki-moon welcomed India’s decision, saying that the growing co-operation with New Delhi will help Africa make economic progress in the coming years. In his progress report on NEPAD, Ban said: “Indian investment in Africa has surged, with major investments in information and communications technology, energy, engineering, chemicals, pharmaceuticals and automobiles sectors.”

In its latest report, KPMG consulting company said: “India has become one of the leading investors in African countries, with investments in joint ventures and wholly owned subsidiaries touching the USD 33 billion mark.” According to the report, India is concentrating on African oil and gas, pharmaceuticals, petrochemicals, IT, fertilisers and infrastructure sectors. It added: “India’s investments in agriculture and telecommunications may also have more of a direct economic impact on the lives of ordinary Africans, 70% of whom are engaged in some form of agriculture, and at least 30% of whom have access to a mobile phone.”

Indian political experts are of the opinion that China’s expanding relationship with Africa has encouraged India to take necessary steps for improving ties with the continent. Developmental policy advisers in India are trying to understand the political dynamics between China and Africa properly as New Delhi takes into consideration the implications of this involvement while forming policies.