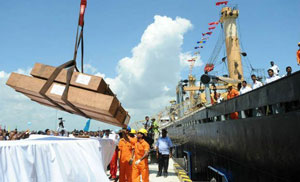 According to KPCT officials, India’s trade with West Africa increased 15 times since 2003. Rice being the main export, followed by pharmaceutical products, machinery, articles of iron, chemicals, plastics, rubber and vehicles. Over 69% of India’s cashew imports go to Ivory Coast, Guinea-Bissau, Benin and Ghana.

Trade takes place largely from two important ports of San Pedro and Abidjan. As both the economies of India and Ivory Coast are poised to grow, KPCT is keen on becoming East India gateway for the two countries.

They were familiarised with the infrastructure and operational advantages of KPCT and the ease of shipping containerised cargo owing to tariff flexibility, connectivity to cashew and timber processing units in the hinterland, various vessel services connecting KPCT with Abidjan and future trade potential benefiting West African countries.
The traders involved in cashew import were impressed when the KPCT delegation presented the advantages of connectivity with Krishnapatnam.

KPCT pointed to saving additional cost through truck movement from Krishnapatnam Port to the final place of delivery in Andhra Pradesh.
KPCT also offered additional free demurrage time (up to 14 days) on a case-to-case basis through respective lines, closed warehouse facility to enable stuffing/de-stuffing inside the warehouse,  24/7 storage and handling of cargo besides cargo storage at free of cost up to 15 days.

“The trade meet was successful in forging a bond with Abidjan trade and a positive step in the direction was the recent rice shipment on Maersk Line’s Northern Endurance from KPCT to the Port of Cotonou in the neighbouring Benin. Trade with Abidjan looks buoyant with cashew importers keen to move their shipments to KPCT in the coming season,” KPCT director Vinia Venkatesh said.