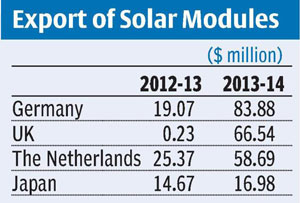 xports of solar modules from India have been on the rise. In 2013-14, they rose by 152 per cent over the previous year - from $106 million in 2012-13 to $270 million last year. Leading manufacturer-exporters say the momentum is continuing into the current year, if not increasing.

Nearly 80 per cent of the exports have been to Europe, notably, to Germany, the Netherlands and the UK (see Table).
Minimum selling price

Why the surge in exports? Last year, the European Union entered into a pact with several Chinese companies - which together had over 60 per cent of the EU market - that made them commit to a minimum selling price and limited their sales by volume.

On those Chinese companies that did not participate in the pact, countervailing duties ranging between 27.3 per cent and 64.9 per cent, were brought in. The pact was struck in December, but ‘provisional anti-dumping duties’ were in force between June and August.

The EU move has clearly helped Indian companies. Narender Surana, Managing Director of the Hyderabad-based Surana Ventures, told Business Line recently that the company had been exporting about 3 MW worth of modules to Germany since last November. Surana Ventures imports cells and makes modules out of them, but intends to soon commission its own cell manufacturing using the machinery it bought last year from bankrupt German company Schott Solar.

Chennai-based Swelect Energy Systems, which produces modules from a plant that it took over from HHV Solar of Bangalore, has found a German customer.

The first lot of 2,400 modules is expected to be shipped to a UK project of the German company next week. Other leading Indian manufacturers such as Vikram Solar and Waaree have also said their exports are on the rise.
Debate on dumping duties

Amid the raging debate in India over whether or not the Government should bring in anti-dumping duties on the Chinese (and American, Malaysian and Taiwanese) companies, the rising exports of modules from India reflects different perspectives to different people.

The manufacturers point to the export statistics and say: ‘See? We do well when the competition is fair’.

The developers feel that the manufacturers have sufficient market reservation for them, in terms of ‘domestic content requirement’ rules. (At the Renergy 2014 expo in Chennai last week, the Joint Secretary in the Ministry of New and Renewable Energy, Tarun Kapur, was overheard saying the Ministry intends to reserve 500 MW a year for domestic manufacturers.)

Now, in addition to the reserved domestic market, Indian manufacturers also have lucrative export business. So, what are they cribbing about, is the other perspective.