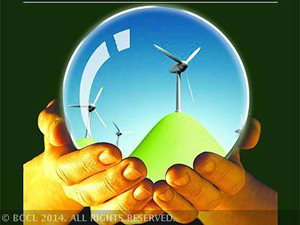 "Investment of Rs 20,000 crore is expected in the next fiscal year, with 70% coming as debt. Rs 5,000-6,000 crore can come from equity. Keeping the potential of wind energy in mind, it's still not big money," Chintan Shah, President (Strategic Business Development) at Suzlon, told ET.

Accelerated depreciation allows a higher level of an asset's value to be written off in the first few years, reducing taxable income. The government proposed reintroducing the benefit in July. Wind power accounts for the biggest chunk of India's renewable energy capacity. Reinstatement of AD makes wind energy attractive for captive use by companies and some even want to hive it off as a separate business unit due to stable long-term returns.

"We've been investing in wind energy since 2006 and stopped during 2013-14 when AD was withdrawn. Back in 2006, investment in wind was a taxsaving tool but that's no more the case. We're hiving it off into a separate business vertical," said Sharad Saluja, Director, Sterling Agro Industries, the maker of Nova dairy products.

The company, which has plants in Haryana, Madhya Pradesh and Uttar Pradesh, plans to add 20-30 mw each year until 2017, investing about Rs 300 crore, with 13 megawatts already under commissioning, Saluja said. Ayurvedic pharmaceutical firm Shree Baidyanath Ayurved Bhawan is setting up an independent power unit to harness wind power. "We're investing close to Rs 450 crore towards the addition of 75 MW of wind energy this year. In the long term, we'd like to scale it up to 500 MW," Baidyanath MD Pranav Sharma told ET. Global consultancy firm KPMG is advising the company for the setting up of Baidyanath Private Power Ltd.

Cement behemoth Holcim Group, which owns ACC and Ambuja Cements, plans to invest Rs 120 crore to add 20 MW of wind power to its existing 26.5 MW, which is the combined capacity of both units. Small and medium enterprises, Surat-based zari exporter Sumilon Industries, like are equally enthused and hope to become more efficient by using cheaper clean power.

Surat-based zari exporter Sumilon Industries, which meets half of its energy needs through wind power, plans to add 4.2 MW over the next two years to its existing 7.4 MW capacity.

"We plan to be a green company in the next five years. Since windmills are expensive, without AD, wind energy is not viable," said Sumilon Industries Director Nikunj Jariwala. NEW DELHI: India's sluggish wind energy market is set for a revival following the restoration of a depreciation incentive, which is expected to attract about Rs 20,000 crore of investments next year as companies across sectors add 3,000 MW of capacity powered by this renewable source of energy.

The reintroduction of accelerated depreciation (AD), which was withdrawn in 2012, is poised to support equipment manufacturers, including Suzlon Energy Ltd, the country's largest wind turbine maker, which received 150 MW of orders soon after the benefit was brought back.