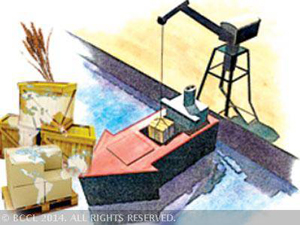 Global commerce is showing improvement and it is expected to grow at 4.7 per cent this year and 5.3 per cent in 2015, said the Federation of Indian Export Organisations.

He said India's traditional markets - the US and Europe - are also posting better economic results. These regions account for about 30 per cent of the country's exports. Slowdown in these western markets have severely impacted India's outbound shipments.

The government is taking several steps to boost the shipments. Soon it is expected to announce measures in the forthcoming foreign trade policy (FTP).

Ahmed said the Commerce Ministry should announce steps such as incentives for project exports, brand promotion, creation of export development fund, measures for service exports and affordable credit to exporters.

Besides, there is a need to revive special economic zones, he added. "There is a need for immediate withdrawal of minimum alternate tax and dividend distribution tax and restore the SEZ policy to its original form. This would go a long way in regaining trust and confidence of domestic and foreign investors."

Ahmed also suggested that the government give interest subsidy scheme benefit to all the sectors and exporters and extend it till March 2017.

To reduce transactions cost for exporters, FIEO D G Ajay Sahai said that time for approvals and clearances should be reduced besides simplification of procedures, reduction of documentation should be given top priority.

Ahmed also recommended that the government announce setting up of country and product specific export clusters or parks on the lines of SEZs.

"It will help in making India a manufacturing and export hub. Government should special emphasis on boosting manufacturing sector as it impacts exports too," he added.

Besides, he said, exporters need to explore markets such as Latin America, Russia and Africa. Exports growth slipped to 7.33 per cent in July after witnessing a double-digit expansion in the previous two months, pushing up the trade deficit to a year-high of $12.22 billion.