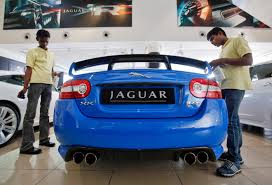 Tata group's Land Rover has forayed into an elite club of world's 100 most valuable brands as the only Indian-owned entity, while iconic Apple has retained its top slot with nearly $119 billion valuation.
Land Rover, an iconic British car brand owned by Indian conglomerate Tatas, has been ranked 91st with a brand value of $4.47 billion and is one of the five new entrants on this annual list compiled by leading brand consultancy Interbrand.
Apple - maker of iPhone mobiles, Mac computers, iPad tablets and iPod music players among others - is followed by Google on the second position ($107 billion). These are the only two with brand values in excess of $100 billion.
While Land Rover is the only Indian-owned entity on the list, there are at least six other brands ranked among top 100 that are part of the entities run by Indian-origin CEOs.
These include Satya Nadella-led Microsoft (5th with brand value of $61 billion), Indra Nooyi-led Pepsi (24th; $19 billion), Shantanu Narayen-led Adobe (77th; $5.3 billion) and Ajay Banga-led MasterCard (88th; $4.7 billion).
Ivan Menezes-led British drinks giant Diageo, which also owns majority stake in India's largest alcoholic beverage manufacturer United Spirits, also has two portfolio brands - Smirnoff (34th; $13 billion) and Johnnie Walker (86th; $4.8 billion) - on the top 100 list.
Land Rover has been ranked higher than many big global brands like FedEx, Huawei, Heineken, Pizza Hut, BOSS, Nokia, Gap and Nintendo.
"Exemplifying British engineering and expertise in the SUV category, the iconic British brand (owned by TATA of India) has invested heavily in product creation, facility, and infrastructure," Interbrand said.
The leading brand consultancy further noted that "with 115 awards across its car range (led by Range Rover with 55 awards), Land Rover is finally getting the recognition it deserves and has improved its J D Power scores significantly."
"With the customer at the heart of the company, a clear focus and significant investment in improving design and quality, and demonstrating world-class technology and innovation, Land Rover is fully equipped to experience accelerating success in the forthcoming Age of You," Interbrand added.
Among top-ten, Apple and Google are followed by Coca-Cola, IBM, Microsoft, GE, Samsung, Toyota, McDonald's and Mercedes Benz.
Apple's brand value increased 21 per cent year-on-year, while for Google it was 15 per cent and for Coca Cola it was 3 per cent.
To be included in Best Global Brands, a brand must be truly global, having successfully transcended geographic and cultural boundaries, Interbrand said.
It must have a significant presence in Asia, Europe, and North America, as well as broad geographic coverage in emerging markets.
Moreover, the brand must have a public profile and awareness across the world's major economies.