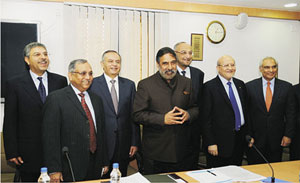 With a view to fully capitalise on India’s potential in export of agriculture and marine-based products, Union ministry of commerce and trade is focusing on increasing the food processing environment in the country. This was revealed to newsmen at a recent press conference organised by the ministry to mark the NDA government’s 100 days in office and highlighted the ministry’s achievements during the period.

The ministry also pointed out that the new foreign trade policy would be different from the previous one and it would yearn to offer a sustainable environment and direction to foreign trade.

Rajiv Kher, commerce secretary, explained, “Our focus is to improve processing environment so that the realisation from superior markets would be great. We have done remarkably well in our agricultural export while the trend continues in the marine exports as well. The growth in marine export has been 32% during April to August period this FY. This is one sector which is doing well.”

Kher added that there were issues with the food trade and the ministry was sorting them out. India's exports of processed food have been Rs 31551.99 crore in 2013-14.

Further, replying to a question by F&B News, he said,“As far as rest of the agricultural exports are concerned this is largely the function of domestic production, the sanitary and phyto sanitary environment of the destination market and agricultural industries’ own capacities to respond to that.”

With regard to issues in the European market, he pointed out that some months ago there was a problem in Europe and consequently it has been decided that there would be serious efforts on India’s part to avoid any such situation. He stated, “When it comes to exporting fruits and vegetables we have now made it mandatory that only from pack house these products will go. clearly to begin with, there will be some relative decline in exports but eventually it will pickup.”

On FTA
As far as Free Trade Agreement (FTA) was concerned, the commerce secretary stated that it was wrong to assume that FTAs would adversely impact the manufacturing sector in the country. “We were hearing from some quarters that FTA was affecting adversely some (part of) manufacturing sector. We have said during our interaction with the industry that our trading partners in the FTA have utilised the FTA to the extent 3-28% and we’re confident that our utilisation is more or less same as our trading partners have,” he observed.

“FTA per say had not adversely affected manufacturing as it was often made out to be. Some segment of a particular sector may be affected but in any trade relationship that is inherent,” he stated.

EU talks
Later, Union commerce minister Nirmala Sitharaman addressed the press.  With regard to the issue related to FTA and European Union, Sitharaman stated that the EU ambassador met her recently and raised the specific issue of FTA with EU.

She explained, “I replied to him that nothing stops India from doing this but let them also come back saying whether they were interested. Because at a time when unilateral agreement are being signed across trans-Atlantic and trans-Pacific you find interest of countries being more focussed towards these and we would like to establish whether they’re interested in coming back.”

She added that talks were in progress for reestablishing interests. “So once that is clearly established we will move forward. It is not like we’re holding back with sense of disillusion, it will start if necessary,” she said.

Plans of the ministry
Meanwhile, the ministry is formulating an insurance-based scheme for stablising of prices of plantation crops namely tea, coffee, rubber and spices.

It has also decided to set up a special agency namely the Saffron Production and Export Development Agency (SPEDA). This agency will have the task for development, production and marketing of saffron with headquarters in Jammu and Kashmir.

Additional measures for promotion of export of orthodox and packaged tea and geographical indication branding of tea are likely to be announced in the next foreign trade policy. Further the commerce ministry will redesign the subsidy-based support under the 12th Plan to achieve the goal of enhancing production as well as export.

The ministry will also take measures to improve quality of grown and manufactured tea with steps to fix, within an early timeframe, MRLs for chemicals authorised for use in tea cultivation in light of the Codex standards.

An exercise of resetting the goals and functions of commodity boards and making them more citizen-centric will be taken up. Branding campaigns are planned for promotion of export of pharmaceuticals, plantation commodities and so on in which India has historical strength.

Further, the Indian Institute of Packaging will be strengthened to emerge as a technology hub for setting packaging standards of export-oriented products in line with international trends and norms and for improving and controlling the quality of export packages.