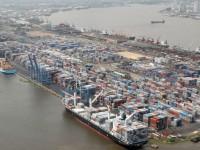 Nigeria is keen to bolster economic ties with the world’s most populated and fastest growing region Asia, as has agreed to double its bilateral trade volumes with the regions’s countries from $40 billion to over $80 billion within the next to two years.

This decision was made at a stakeholder meeting between the Nigerian Ministry of Industry Trade and Investment and Nigeria’s ambassadors across fourteen Asian countries in New Delhi, India.

Aside from boosting bilateral trade relations with existing partners, the meeting which was the first of its kind in over 50 years will see the it open fresh investment commitments to major Indian companies, who were not yet present in Nigeria.

“It is only those who live in the past that still believe that the West can help us. The Asian continent has great regards for Nigeria as a country,” Nigerian High Commissioner to India, Ndubuisi Amaku said.

Nigeria is shifting its attention from the West to Asia which has been declared by Economists the fastest growing region in the world, the only continent to outpace Africa’s surging numbers.