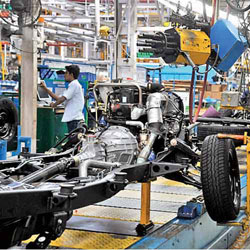 making the country a global manufacturing hub, India is seeking to engage with Finland, known for its knowledge-based economy and clean technology, official sources said here today ahead of President Pranab Mukherjee's visit to this key Nordic nation.

"India views Finland as an important member of the European Union and a repository of modern technology and Finland sees in India a large market for its products and a favourable investment destination for its high technology industries," they said on the eve of Mukherjee's visit to Finland, the first by an Indian president in 26 years.

"In Finland we also have a reliable trade partner, heavily industrialised in a very green way. We have $1.5 billion of trade and there are over 100 Finnish companies in India which are working here including in R&D," they said.

India is one of the centres which hosts one of the five global centres of innovation run by Finland known as FinNode.

The main focus areas of FinNode India are clean tech, education and learning, health care and wellbeing, and innovations to base-of-the-pyramid markets.

A number of agreements covering education, energy, fishing and other sectors, both on government-to-government, business-to-business as well as institution-to-institution are expected to be signed during Mukherjee's three-day state visit beginning tomorrow.

"The prospects for the already active Indo-Finnish cooperation on science and technology look promising with increasingly diverse opportunities opening not only for the authorities but also for research organisations, technology companies and sponsors," Finnish officials said.

Finland was a largely agrarian society up until World War II, when it transformed itself into a post-industrial society with a strong focus on education and research.

Industrialisation began late but the process from primary production to labour and capital-intensive manufacturing and then to a knowledge-based economy has been rapid.

Today Finland ranks among the most competitive economies in the world. The country is highly globalised and foreign trade forms an integral part of the business culture. In the 1990s, knowledge drove economic growth and transformation and in less than a decade Finland became an information and communications technology specialised economy.

Alongside electronics and high technology, traditional branches of industry have remained. Finland is one of the world's leading wood producers.

The largest sector of the Finnish economy is services (65 per cent), followed by manufacturing and refining (31 per cent). Primary production accounts for 3 per cent.

On the investments side, large Finnish companies like Nokia, Kone elevators, Wartsila, Ahlstrom, Elcoteq, Metso, Fortum, UPM have set up manufacturing facilities in India. Over 130 Finnish companies have operations in India and 30 Indian companies, mainly in the software and consultancy sector, are working in Finland.

Currently, there are about 400 Indian professionals working in Finland for Finnish high-tech companies and Indian software companies like TCS and others based in Finland. There are also a small number of Indian/PIO academics working in Finnish universities.

Though the last Indian president to visit Finland was R Venkataraman in 1988, officials from both sides emphasised that Indo-Finnish ties have been steadily growing and the two nations enjoyed stable political relations, including Helsinki backing New Delhi's aspirations to be a member of the revamped UN Security Council and membership of the Nuclear Suppliers Group.