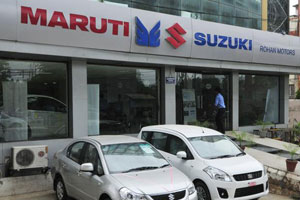 New Delhi: Stating India has the potential to become the biggest car manufacturer of the world, country’s top car maker Maruti Suzuki India Ltd on Thursday hoped factors adversely affecting competitiveness of manufacturing will be removed quickly, in line with Prime Minister Narendra Modi’s call to make India a manufacturing hub. “Costs of production in India increase because of various government policies, procedures, regulations and the way some of the laws are implemented,” said Kenichi Ayukawa, managing director and chief executive officer (CEO), Maruti Suzuki, at the “Make in India” campaign. Stating that India is not the easiest country to do business in, he said, “We are fully confident that, under the ‘Make in India’ programme of the Prime Minister, factors that adversely affect the competitiveness of manufacturing will now be removed quickly,” he said adding India will then become one of the most competitive manufacturing countries in the world. Welcoming Modi’s call to “Make in India”, he said Maruti Suzuki was amongst the very first multi-national corporation companies to start a major manufacturing operation in India in 1983. “Over 30 years ago, Osamu Suzuki, chairman, Suzuki Motor Corp., recognised the potential of India, both as a market and as a country where high quality manufacturing was possible,” he said, adding globally, Maruti Suzuki is the most successful venture of Suzuki group. He said the cars Maruti Suzuki makes in India are lower in costs than similar products made by it in other parts of the world. This enabled Maruti to start exporting cars in 1986 to several countries including western Europe. Suzuki Japan made India its manufacturing hub for compact car Zen in 1994 for export to European countries. Since 1983, Maruti has been making special efforts to develop a vibrant component manufacturing industry in India. “This, along with the rapidly growing car production and demand, with high local content, and low costs, was largely responsible for all the major car manufacturers of the world establishing production facilities in India,” he said. The growth of the car industry also attracted investments from a large number of global automotive component manufacturers. “Our experience with Indian managers, engineers and work force, despite an exception in 2012, has been excellent. We have been able to effectively implement work practices based on our Japanese experience, but suitably modified for India, that have resulted in continuous growth of productivity, improvements in quality and lower costs,” he said. India continues to be a major exporter of Suzuki branded cars. Other car manufacturers have also made India one of their manufacturing hubs for exports. Car exports from India have reached the levels of around six lakh units annually. “This has been achieved despite the well recognised fact that India is not the easiest country to do business in,” he added.