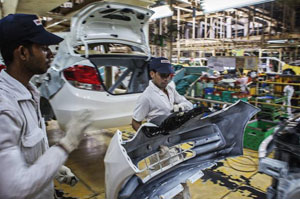 “We are here as we have a future in India,” said Kazuhisa Takai, vice president at Sakura Autoparts India Pvt. Ltd. Takai’s firm is one of eight Japanese auto component firms setting up manufacturing facilities in the outskirts of Chennai for India Yamaha Motor Pvt. Ltd’s second factory in the region. Takai’s statement sums up the sentiments of a number of Japanese auto parts makers. They are looking to set up and expand in India to meet the needs of auto makers from their country as Toyota Motor Co., Suzuki Motor Corp., and Honda Motor Co. embark on an aggressive localization and expansion drive in India. There are close to 250 Japanese component makers already operating in India, according to the Auto Component Manufacturers Association (Acma)—a number that is set to swell by 35-40% over the next five years as Japanese parts makers boost investments in the Indian market, said analysts and investment bankers. Since Prime Minister Narendra Modi’s recent visit to Japan, the nation’s automobile industry has been making serious attempts to grow their India business, said R.C. Bhargava, chairman of India’s top car maker Maruti Suzuki India Ltd. Parent Suzuki Motor paved the way for investments by suppliers from Japan when it first entered the market in collaboration with the Indian government in 1982. At least 80-100 suppliers will be entering India for setting up units for making parts for Toyota Kirloskar Motor Pvt Ltd, said Shekar Viswanathan, vice chairman and whole-time director of Toyota Kirloskar Motor Pvt Ltd. Getting suppliers from Toyota’s global supply chain to set up manufacturing facilities in India, he said, is part of the company’s strategy to be able to launch future models with a higher proportion of locally produced parts. Viswanathan declined to identify any of these firms as they are in various stages of entering the market. “It would be an opportunity for them (Japanese auto part firms) not only to feed the local market, which is expected to expand at a fast pace after a decade’s worst slowdown, but also to use India as an export hub,” said Amit Kaushik, principal analyst at I.H.S Automotive, a market researcher. Kaushik estimates the Japanese supplier base will grow by at least a third over the next five years. The Japanese companies are showing a renewed interest in the auto ancillary space after a long time, said Anil Singhvi, founder and chairman at Ican Investment Advisors, a Mumbai-based investment banking firm. Besides the growth opportunity that India offers, the depreciating currency is an advantage for these firms, he said, adding that mergers and acquisitions in the space could also pick up. “I believe that transactions will increase in this space where Japanese players will look to take more control,” said Singhvi. If recent deals are any indication, the trend is already underway. On 25 September, Rico Auto Ltd informed the stock exchanges it has sold its stake in the joint venture FCC-Rico to its Japanese partner FCC Co. Ltd, allowing the Japanese company to take full control of the operations here. In March, Lumax Auto Technologies Ltd formed a joint venture with Mannoh Industrial Co. Ltd of Japan to make gear shift levers. Prior to this, Mannoh had only a technical alliance with Lumax. “They were keen to engage with the Indian market more deeply, hence we floated this new company in which Mannoh has 45% stake,” said Deepak Jain, managing director at Lumax Industries Ltd. Meanwhile, Jain’s firm is also in talks with two others Japanese firms for a joint venture in electronic and electrical parts. The deal, he said would be concluded in a few months. Minda Industries, the Delhi-based auto component maker, formed a joint venture with Panasonic Japan for making lead acid batteries for automotive and industrial applications, the company said earlier this month. Influx of component suppliers from Japan is leading to emergence of dedicated Japanese supplier parks in Gujarat, Karnataka and Tamil Nadu. These would be similar to the one in Neemrana in Rajasthan that came up a year and half back. Toyota’s Viswanathan said his company is in talks with the state government for a land parcel near Tumkur in Karnataka for auto component firms looking to set up shop to cater to Toyota’s needs. Gujarat Industrial Development Corp. (GIDC) has identified 115 hectares of land for drawing investment from Japanese companies, especially auto component makers, according to GIDC officials, who declined to be identified. Some of the companies that have been received approval to set up units in the industrial park include MA Extrusion India Pvt. Ltd, Toyota Forms India Pvt. Ltd, ROKI Minda Co. Pvt. Ltd and TS Tech Co. Ltd. “These companies plan to manufacture parts including automobile seats, air cleaner, pre-cast concrete forms, etc,” an official from GIDC said, declining to be identified. Some of the other firms which are setting up plants in the region include Hitachi Hi Rel Electronics, Mitsui Kinzoku Components Ltd and Showa India Ltd. The firms will be catering to the requirements of Suzuki Motor, Honda and others that announced their expansion plans earlier this year. In January, Suzuki said it would invest Rs.3,000 crore in a plant in Gujarat and sell the cars it produces there to Maruti Suzuki. With an annual capacity of 1.5 million units, the plant will start production in 2017. In February, Honda Motorcycle and Scooter India Pvt. Ltd (HMSI), also announced plans to set up a 1.2 million per annum capacity scooter factory in Gujarat. In August, Honda Cars India Ltd too announced plans to build a third factory with a 240,000 units per annum capacity, in Gujarat.