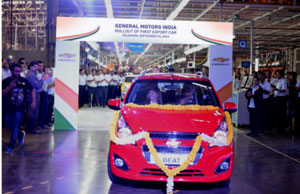 Jaipur: GM CEO Mary Barra took part in the celebration of production of the first Chevrolet vehicle for export from an Indian plant. Mary visited the Talegaon manufacturing facility in Pune where the first batch of vehicles will be exported to Chile by next year.

“India represents a great opportunity for Chevrolet,” Barra said. “With a relatively small vehicle population and rapidly growing, young middle class, India is expected to become one of the world’s three largest markets by 2020.” She further added, “GM is working to better understand the Indian market so we can give Indian customers what they deserve -- safe, high quality Chevrolet vehicles with exceptional designs that exceed expectations.”

With a total investment of over $1 billion till date in India, the manufacturer looks forward to develop more than 2,80,000 vehicles per year from its manufacturing at Talegaon and Halol.

On the very same day, Barra also had a meeting with Prime Minister Narendra Modi where she congratulated him over his recent victory and thanked him for supporting the growth of GM India.

Stefan Jacoby, Executive Vice President and President, GM International said, “GM remains open to the long-term prospects for India and its automotive industry. However, we are going in with our eyes wide open to ensure that our investment is good for India and good for General Motors.”