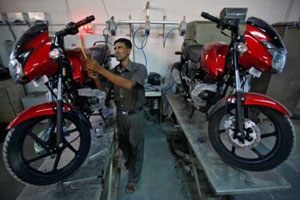 Revenues of the Indian auto industry can rise 5-fold to hit the $300 billion mark, and volumes can log in over 3-fold increase to around 76 million units by 2026, according to a report.

As per the Vision 2026, prepared by ICRA Management Consulting Services (IMaCS) as an input for the Automotive Mission Plan (AMP) 2026, passenger vehicle sales will grow to 13.4 million units per annum from 3.1 million in FY14.

It is estimated that the Indian auto industry will grow to 75.8 million units by FY 2026 as compared to 21.5 million units in FY14.

"Vision 2026 will enable the Indian auto industry to contribute around 13 per cent to GDP, generation of additional 100 million jobs and attract more than $80 billion in investments," it said.

As per the document, over the next 10 years there will be a shift in global trend with 75 per cent of incremental demand expected to come from BRICS and emerging economies.

It also expects the proportions of A and B segments (compact cars) to rise sharply in the next decade. It further anticipates India to be among the top three automotive markets in the world.

The document also lists various factors like creation of infrastructure, human resources and incentivisation as the enablers to achieve the targets under the Vision 2026 plan.

Further, the implementation of GST, ban on overloading in commercial vehicles and urban planning are some of the factors which would help the Indian auto industry grow in the next 10 years, it added.

The AMP 2026 is under formulation but the economic slowdown in the last three years that resulted in a demand slump is expected to force the Indian auto industry to miss by up to 25 per cent of the targets set in AMP 2016.

The auto industry had set an ambitious target under the AMP 2006-2016 to take its annual turnover to $145 billion with special emphasis on export of small cars, MUVs, two and three wheelers and auto components.

AMP 2006-2016, announced in 2006, had set a goal for India to become the "destination of choice in the world for the design and manufacture of automobiles and auto components with output reaching a level of $145 billion accounting for more than 10 per cent of GDP and providing additional employment to 25 million people by 2016".