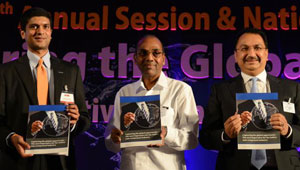 Indian auto component makers are well positioned to benefit from globalisation of the sector as exports potential could be increased by up to four times to USD 40 billion by 2020.

A joint report by ACMA and McKinsey -- Capturing the global opportunity, The next imperative for the Indian auto component industry -- said globalisation in the auto-suppliers industry is an irreversible trend and is likely to increase.

Indian suppliers are well positioned to benefit from these global trends and can significantly accelerate their international presence in the next few years, it said.

Based on market comparisons, supplier and OEM surveys, the Indian suppliers can nurture a three-pronged 2020 aspiration, it added.

According to the report, globalisation of the component industry would be driven by five macro-trends, including globalisation by OEMs with suppliers following them and maturing of low-cost countries (LCC) as export hubs.

The report further said that platform consolidation and shift towards large global suppliers, increasing aspiration of emerging market suppliers to access new markets and technologies and market diversification for margin resiliency would also contribute to the globalisation drive.

The report also identified and suggested that Indian suppliers can significantly accelerate their international presence in the next few years.

It said the year gone by has been one of the most challenging in the history of automotive industry in India.

During the trying times, each one of the players have had to go back to the drawing board, revisit strategies, reorient their organisations, streamline processes and revitalise their companies to gear up and deal with the challenges, it said.

"This has helped the component manufacturers to evolve into stronger entities with better capabilities to be globally competitive," ACMA (Automotive Component Manufacturers Association of India) said.

This period has made the component makers to look at international markets in a more serious way and the need to become an integral part of a global auto supply chain has become ingrained as a strategic intent, it added.