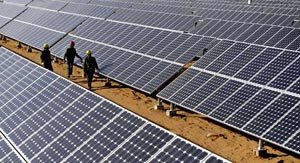 Amid looming power crisis which stands to be a major hurdle for Indian industrial growth in the wake of possible cancellation of coal block allotment by the Supreme Court, the Centre is expecting $ 100 billion investment in the renewable energy sector in the next four years, as it firms up a new policy framework for the same.

The Government is working on a renewable energy policy to attract investments in the space by providing tax breaks and cheaper loans.

The Power Ministry is focused in fulfilling the target of providing 24×7 electricity to every household in the nation within the span of five years.

The Minister’s statement generates great hope since India is primarily reliant on fossil based sources for electricity generation, especially coal which provides about 70 percent of the total power.

There is little chance that India could get close to meeting its coal requirement from domestic sources, meaning imports will have to increase, putting added burden on the current account deficit.

The Minister, while speaking on the issue of solar power generation, said that the Government had ambitious plans in this sector but imposition of anti-dumping duty will kill the solar mission.

He underlined the fact that imposition of any such duty would have led to escalation in the tariff from solar plants.

On the challenges in this regard, he added, “Imports were necessary as the domestic manufacturing had not scaled up to a level wherein it could provide the required number for a full fledged solar mission.”

The Minister had earlier said that domestic solar equipment manufacturing capacity of 700-800 MW is not sufficient to meet the Government’s ambitious plans of adding more power generation capacity through renewable energy sources.

India is seen as one of the world’s fastest growing economies and the policy paralysis of the previous UPA Government proved to be catastrophic. If the new Government could replicate the work done in Gujarat in power sector under Narendra Modi, by introducing drastic changes in the policy, the economy will get much needed boost.