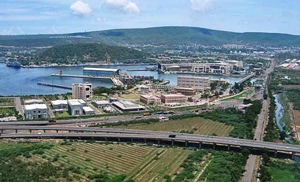 As per the proposals finalised by the district administration, as part of the city’s vision document that would be submitted to the state government shortly, Vizag would need and get a Greenfield airport, 140 km outer ring road, 72.5 km inner ring road, 25 km long metro rail, 140 kms long express highway from Vizag to Kakinada in PCPIR zone, glass coach to Araku, other tourist attractions and various facilities for IT sector.

According to the rough estimates, a Greenfield airport needs approximate funds of Rs 10,000 crore and at least 2,000 acres of land. As per the bifurcation deal, an expert committee headed by Air India chief had already visited various sites in and around Vizag last month to finalise a suitable location and the committee is yet to submit its report. Meanwhile, in his vision document for each district, the Chief Minister said Vizianagaram would get Greenfield airport hinting that the proposed airport will come up at Bhogapuram on Vizag- Vizianagaram border.

An outer ring road for Vizag on the lines of Hyderabad ORR, in a stretch of 140 km from Payakaraopeta to Pharma cluster at Pydibhimavaram in Srikakulam will be laid at a cost of Rs 1,875 crore. A 72 km long inner ring road is also planned.

Authorities also planned a 140 km express highway from Vizag to Kakinada as part of PCPIR. Besides, as planned, Vizag would get metro rail initially in 25 km stretch. As per the rough estimates, metro line per kilometer costs around Rs 200 crore and the entire Vizag metro project costs Rs 5,000 crore. Delhi Metro Rail Corporation (DMRC), to whom the state government had entrusted Vizag and Vijayawada metro rail projects, will soon begin preparing the DPR.

Most of these proposals have come up for discussion at a meeting held by district collector N. Yuvaraj with public representatives, members of academia and industry on Tuesday.