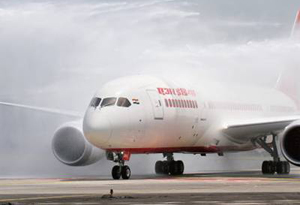 NEW DELHI: Air India is likely to ink a memorandum of understanding with government-owned National Buildings Construction Corporation (NBCC) this month to help the flag carrier monetise its assets, after it failed to do so on its own.

The loss-making airline has been struggling to sell or lease its assets including land and buildings that the government recommended as part of a bailout plan in 2012.

"It's a generic MoU that allows NBCC to help Air India monetise its land assets and both of us have agreed on the terms. In the development process, land will be Air India's equity and our equity will be the investment in creating any infrastructure on the land. The profit from any asset will be shared according to the equity," said a top NBCC official, requesting anonymity.

The official added that the NBCC will develop only land and not the apartments and flats that Air India owns across the globe. According to the government's turnaround plan for Air India, the carrier needs to raise Rs 5,000 crore through sale and leasing of assets, which will be used for repayment of loans. The airline has a debt of Rs 40,000 crore, with an annual interest payment outlay of Rs 3,700 crore.

An Air India executive said that the airline has not been able to monetise assets primarily due to rules governing land acquisition. "Take the example of our land on Baba Kharag Singh Marg in New Delhi, which could have easily fetched us about Rs 900 crore. The land could not be sold or leased due to an issue with land use that bars us from using it for anything but ticketing offices," said the executive, who did not wish to be identified.

The executive added, "NBCC is an expert in these matters and we expect them to expedite our monetisation plan. The draft MoU is a generic one and we will be deciding the mode to be followed during monetisation later." Air India's finance department is studying three models for monetisation - outright sale, where Air India sells everything to NBCC and keeps the money; letting NBCC develop the land on its own so that the airline can earn from rentals and share the revenue that the developed asset generates; and sharing the cost of developing an asset on the land and the revenue generated from it in the future.

Air India's performance in asset monetisation has been dismal. While the national carrier has been able to rent out its floors in the Air India building in Mumbai, flats and land parcels in Hong Kong, Nairobi, Mauritius, Mumbai, New Delhi, Gurgaon, Chennai, Kolkata and Coimbatore are yet to be sold or leased.