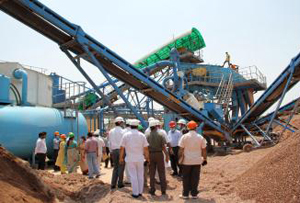 Over the last five years, India’s first and only recycling plant for construction and demolition (C&D) waste has saved the already-polluted Yamuna and the overflowing landfills of Delhi from 15.4 lakh tonnes of debris.

A Ministry of Urban Development circular on June 28, 2012, directed States to set-up such facilities in all cities with a population of over 10 lakh. But, till now the existing facility at Burari is the only one.

In the past few months, efforts are on to increase the plant’s production, as well as set up more facilities to reduce the amount of waste dumped at landfills. The erstwhile unified Municipal Corporation of Delhi (MCD) had started the plant in 2009, with Infrastructure Leasing & Financial Services (IL&FS) operating the 10-acre site at Burari at Jahangirpuri in North Delhi.

A meeting of the North Delhi Municipal Corporation's Standing Committee on Thursday approved the waste collection contract with IL&FS till 2019 and sanctioned Rs. 23 crore for the expenditure on transporting the materials to the plant. Members of the committee visited the plant on Wednesday.

With near-constant buzz of construction activity across the Capital, 5,000 tonnes of waste is produced by building, demolition and land-clearing activities every day. Though the plant was set up with 500 tonnes per day (TPD) capacity, it has more than doubled today.

As of now, most of the C&D waste produced in Delhi ends up being dumped along the Yamuna or in the Ridge area. Making recycling difficult, it is usually mixed with municipal solid waste.

The IL&FS facility gets mixed C&D waste from 28 designated points in three zones of the North Corporation, which pays for transportation. The civic body collects and transports the waste to the plant from the remaining of the areas.

Once at the plant, the waste is segregated into big concrete pieces, mixed C&D waste as per size and unrecyclable materials like plastic and wood, which are sent to a waste-to-energy plant in Okhla.

The plant uses manual segregation for bigger plastic pieces as well as a magnetic separator for metallic objects.

Over the years, Mr. Singh said, the process has been tinkered with as the amount of sand in the mixed waste has increased.

“We had to put in place a wet processing unit so that the sand doesn’t fly around. We started using equipment used in the mining industry,” he added.

IL&FS senior technical advisor N.B. Mazumdar added: “In dry processing, there is 40 per cent to 50 per cent of rejects, but with wet processing we have brought the reject ratio to five per cent to 10 per cent.”

Not only does the plant reduce the load at landfills, it is also better for the environment as it uses treated effluent supplied from the Delhi Jal Board.

“We get about 10 to 12 tankers of treated effluent every day for the washing process and even that water we recycle and use again,” explained Mr. Singh, adding that the plant was a “zero-discharge facility”.

Officials in the North Corporation are hoping that the capacity of the plant can be increased and the C&D waste in the remaining three zones can also picked up by IL&FS. Standing Committee chairperson Mohan Bhardwaj said such facilities should be encouraged as they can help control Delhi’s garbage problem.

“We are ready to buy the products made at the plant once standards have been put in place,” Mr. Bhardwaj said in reference to the recycled construction material, which is currently only sold to private individuals and builders, and not government departments.

A committee set up to look into BIS regulations is likely to include C&D aggregate in its policy within a few months. Once the aggregate is allowed, the end-products will be used by government departments and larger builders.