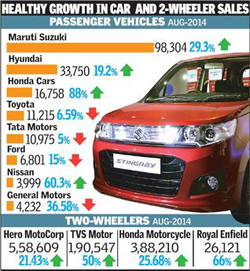 Riding on improved consumer sentiment, major car makers such as Maruti Suzuki, Honda Cars and Hyundai posted good growth in sales in August 2014, raising hopes of better demand in the coming months with the festival season on the horizon.

Market leader Maruti Suzuki India posted 29.3 per cent growth in domestic sales at 98,304 units against 76,018 units in the year ago period, with compact car sales driving bulk of the growth. Compact cars (Swift, Estilo, Celerio, Ritz and Dzire) sales shot up by 53.2 per cent to 46,759 units, while those of mini passenger cars (Alto, A-Star and WagonR) rose 8.3 per cent to 34,686 units.

Likewise, Hyundai Motor India’s domestic sales grew 19.2 per cent to 33,750 units from 28,311 units. The company’s Senior Vice President (Sales and Marketing), Rakesh Srivastava, said the company had received good response for the new products such as Elite i20, Xcent and the Grand i10 and “we maintain a cautious optimism for a good festive season on the strength of new products, increase in demand for petrol cars and improving customer sentiments.”

Honda Cars India too posted 88 per cent jump in domestic sales at 16,758 units as against 8,913 units. Its Senior Vice President (Marketing and Sales) Jnaneswar Sen said, “The festive season has already set-in and will bring further cheer to the market.”

Meanwhile, other manufacturers such as Mahindra & Mahindra, Toyota Kirloskar Motor, Ford India and General Motors saw a decline in domestic sales in August.

Mahindra & Mahindra’s domestic sales went down by 5.72 per cent to 33,145 units. M&M Chief Executive Automotive Division and International Operations (AFS), Pravin Shah, said, “We continue to be optimistic due to the industry’s enhanced business confidence which is reflected by the manufacturing sector showing signs of revival. The automotive industry, including us, is hopeful of a better demand leading up to the ensuing festival season.”

Vinay Piparsania, Executive Director (Marketing, Sales and Service), Ford India, which saw 15 per cent decline in domestic sales at 6,801 units, said, “We anticipate a continued revival in customer sentiments as we lead up to the festive season.”

General Motors India also reported a 36.58 per cent decline in August sales at 4,232 units. Its Vice President P. Balendran said, “There is some positive movement in the market because of new entries. However, the buoyancy is still missing and we expect the market to improve only during the festival season.”

The two-wheeler segment continued its good run. Hero MotoCorp’s total sales rose 21.43 per cent to 5.59 lakh units in August. The company said it would keep up with the growth momentum for the festive season with “as many as 10 new launches, including new models, upgrades and refreshes,” during the period.

Honda Motorcycle & Scooter India said its total sales rose 25.68 per cent in August at 3.88 lakh units, while Royal Enfield reported a 66 per cent jump in domestic sales at 26,121 units.