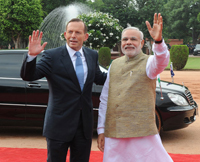 India and Australia on Friday finalised a deal to allow export of uranium to New Delhi for use in power generation.

There was a formal welcome ceremony by Prime Minister Narendra Modi who expressed his confidence of strengthening relations with Australia.

"A warm welcome to PM Tony Abbott! I am sure his visit will further strengthen ties between Australia and India," Modi said in a tweet.

He was received at the airport by Piyush Goyal, union minister of state (independent charge) for power, coal and new renewable energy.

Abott arrived in Mumbai on Thursday.