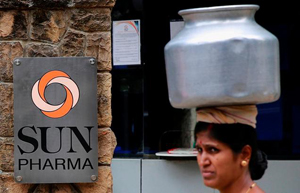 Sun Pharmaceutical Industries reported a consolidated net profit of Rs.1,391 crore for the first quarter of 2014-15, against a loss of Rs.1,276 crore in the year-ago period due to provision of Rs.2,517 crore towards settlement for patent infringement litigation.

Sun’s branded generic sales in India at Rs.992 crore grew 17 per cent. Its U.S. sales grew 7 per cent to $389 million and accounts for 58 per cent of total sales while international formulation sales outside U.S. at $82 million grew 2 per cent.

In a statement, Dilip Shanghvi, MD of Sun said, “Our Q1 performance was in line with our expectations.’’

Led by higher other income and lower finance cost, Bharat Petroleum Corporation Ltd. (BPCL) has reported an eight-fold jump in its first quarter net profit at Rs.1,216 crore against Rs.150 crore in the year-ago period

Wockhardt reported a 94 per cent drop in its consolidated net profit at Rs.20 crore for the first quarter of 2014-15. Its consolidated sales fell 27 per cent to Rs.991 crore.

The company has had problems with the U.S. Food & Drug Administration (FDA) which had banned its export facilities.

The fall in profitability has been due to a drop of 60 per cent in its U.S. business which contributed 29 per cent of the global revenues during the quarter.

Wockhardt’s operating profit declined by 86 per cent to Rs.61 crore and the operating margin had contracted to 6.2 per cent (31 per cent).

During the period under review, the company posted a standalone revenue of Rs.1,053.72 crore against Rs.895.04 crore.

Lanco Industries reported a sharp rice in its net profit at Rs.12.84 crore in the first quarter ended June 30, 2014, against Rs.3.50 crore in the year ago period.

Total income stood at Rs.216.97 crore against Rs.220.99 crore. The company’s board has also approved change in the name of the company from Lanco Industries Limited to Srikalahasti Pipes Limited.

The reduction in net loss was mainly due to lower forex losses and depreciation in its wholly-owned subsidiary Coastal Gujarat Power, the company said. Revenues were lower at Rs.8,765.65 crore against Rs.9,339.49 crore.