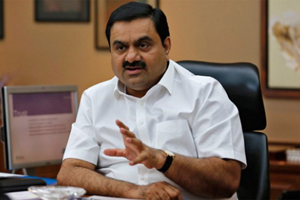 Expansion of Dhamra Port in Bhadrak district will start soon, Adani Group chairman Gautam Adani said here on Monday.Speaking to the media here after meeting chief minister Naveen Patnaik, Adani said, "The state government has already cleared all hurdles for expansion of the port's capacity from 25 million tonnes per annum (MTPA) to 100 MTPA in five years." When completed, the port would have13 berths, including two fully-mechanised ones, Adani added.

Adani Ports and Special Economic Zone (APSEZ) acquired Dhamra Port from Larsen & Tubro (L&T) and Tata at an enterprise value of Rs 5,500 crore in May.

The port commenced commercial operations in May 2011. It has got environment clearance for the proposed expansion at an estimated cost of Rs 10,000 crore. The proposed expansion would pave way for establishment of a five MTPA liquefied natural gas terminal within the port by Indian Oil Corporation at an estimated cost of Rs 5,000 crore. Adani also discussed with the CM about setting up a power plant at Chhendipada in Angul district.