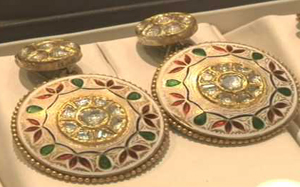 Gold jewellery exports from India has increased 23% in the first quarter of the current fiscal to nearly $2 billion, even as the global demand for the jewellery saw a decline of 36% in the same period.

According to a report by the World Gold Council, the demand fell due to a decreased off-take in Asia and the Middle East. However, demand picked up in the US and UK.

Industry experts also attributed the increase in exports to a decline in gold price.Pankaj Parekh, vice-chairman, GJEPC, said, "As compared to 2013, gold prices have softened almost 13%. Also, the economies of the US and the UK are recovering, which has led to the rise in exports."

Vipul Sutariya of Dharmanandan Diamonds, a DTC sightholder company, said, "The jewellery markets in US and UK are performing well. Since the gold prices have fallen internationally, consumers are looking at gold-studded jewellery."

Aniruddha Lidbide, gems and jewellery sector analyst, said, "Some jewellery manufacturers are making minimum use of gold in studded jewellery to cut costs. Jewellery with lower gold component has become a major hit in western countries."

According to the Gems and Jewellery Export Promotion Council (GJEPC), India exported Rs 12,115 crore worth gold jewellery in the quarter, registering an increase of 23.36% compared to the same period last year.

"The decline in jewellery demand was dramatic, given such high levels of demand one year earlier. Broad weakness for gold jewelry was noted across Asia and the Middle East, while western markets recorded some improvement, except for Italy, where the fabrication sector is benefiting from improved US demand and re-stocking in other key markets," WGC said in its report.

In India, however, gold jewelry demand fell 25% to $6.4 billion. The WGC stated that an "unofficial flow of gold" into India continued during the second quarter, particularly during the first half as premiums were pushed higher. Such flow of gold will likely build momentum over the coming months as the market moves into the seasonally stronger period of Diwali and the wedding season.