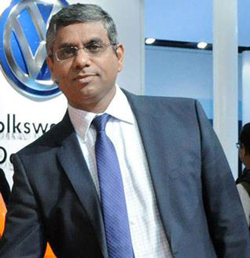 Volkswagen India plans to export half the cars it will make at its Chakan plant this year amid continuing sluggishness in the domestic market.

Last year, the German company sold 100,000 units, while exports stood at 25 per cent.Though the Chakan plant in Pune was built primarily to serve the Indian market, VW is not complaining about the rising overseas sales. “We need to stand on two strong legs,” Mahesh Kodumudi, Group Chief Representative, Volkswagen Group India, and President and MD, VW India, told BusinessLine.

VW currently exports both the Polo and the Vento, and Mexico is one of its main overseas markets. The higher exports have also led VW to sell more petrol cars in comparison to diesel cars. While last year, 45 per cent of all the cars sold were petrol variants, in the first half of this year, the number stood at 69 per cent.

Earlier on Tuesday, VW announced it has invested ?240 crore to establish a new diesel engine assembly line and an engine testing facility at Chakan. At full capacity, the new line can assemble over 98,000 engines.

Building of the new 1.5-litre TDI diesel engine, developed specially for the Indian market and used in the recently launched new Polo and the Polo GT TDI, will begin at the end of 2014.

The company was also looking at building petrol engines at Chakan, Kodumudi said, but plans have not yet been finalised.

The new line will address the needs of the Indian market, as currently the overseas countries are mainly petrol markets. “If needed, we will be happy to make them for export,” Kodumudi added.

Over 260 additional direct jobs will be created in the Pune plant alone, in addition to those created at the Indian suppliers who will be producing and supplying parts and components for this engine.