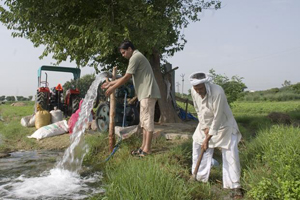 New Delhi: Setting itself the target of sustaining a 4% growth rate in agriculture against the odds posed by a deficit monsoon, the Union Budget announced a slew of measures to make farming competitive and better integrated with the market.

“There is an urgent need to step up investment, both public and private, in agro-technology development and creation and modernization of existing agri-business infrastructure,” finance minister Arun Jaitley said while presenting his maiden budget.

The new schemes that were announced are intended to change not only farming practices but also storage, distribution, and marketing. Taking the recommendations of the Economic Survey, the budget reiterated the need to link markets across the country by setting up a national market for farm produce. By increasing competition and integrating markets across the country, both farmer’s and consumer’s interests will be served, the finance minister said.

“The Central Government will work closely with the State Governments to re-orient their respective APMC (agricultural produce market committee) Acts, to provide for establishment of private markets.”

The budget peppered funds in newer schemes such as providing every farmer with a soil health card to check any imbalance in fertilizer use and setting up of mobile soil testing labs (Rs.156 crore) and introduced a new Rs.1,000 crore ‘Pradhan Mantri Krishi Sinchayee Yojana’ to improve access to irrigation in rain-fed areas.

A major thrust was channelling agricultural credit in newer ways. The Union budget not only set a target of Rs.8 lakh crore during 2014-15 towards rural credit, it introduced a Rs.5,000 crore warehouse infrastructure fund. “By strengthening the value chain from production to distribution and marketing the budget addresses several core concerns.

“Several initiatives like the Rs.100 crore climate adaptation fund or Rs.50 crore for each centre for excellence in agricultural research are steps in the right direction, but the allocations are too small to make a difference for a large country like India.

The budget also reiterated the present government’s commitment towards reforming the food sector. “Restructuring FCI (Food Corporation of India), reducing transportation and distribution losses and efficacy of PDS (public distribution system) would be taken up on priority,” the finance minister said.

The finance minister made the present government’s intentions clear on linking the existing rural employment guarantee scheme (MGNREGA) “through works that are more productive, asset creating and substantially linked to agriculture and allied activities”.

Budgetary allocation was marginally increased to Rs.34,000 crore from Rs.33,000 crore in the last fiscal. In its election manifesto BJP had promised to take steps to enhance profitability in agriculture by ensuring a minimum of 50% profits over the cost of production, cheaper agriculture inputs and credit; introducing latest technologies for farming and high yielding seeds and linking MGNREGA to agriculture.

“Ways in which convergence of MGNREGA with agriculture will take place is unclear. Infrastructural asset creation in agriculture will mean use of more materials, machines end employing contractors and this will shrink the labour requirement,” said Yamini Aiyar, director of accountability initiative at the Centre for Policy Research, Delhi.