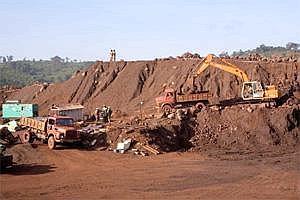 Iron ore exports have nosedived 40.5 per cent to 1.93 million tonnes in the Q1 ended June 30 this year, down from 3.26 mt in the corresponding quarter of last year.

The decline has been attributed to a slowdown in spot market prices globally and better prices in the domestic market owing to the mining ban in Odisha.

According to data compiled by Delhi based OreTeam Research, exports surpassed the 1-mt mark in April to 1.08 million tonne. Subsequently, in May and June, they steadily declined to 0.581 million tonne and 0.277 million tonne respectively.

As production in Odisha came to a standstill, exporters preferred to sell their stocks in the domestic market and book profits. Overall, the margins shrunk for traders and merchant miners in the export market.

Chinese buyers, too, seemed uninterested as the stockpile at their ports went up to 115 MT with good availability of concentrate.

Another factor hurting iron ore export was the continued differential rate and increased freight charged by the Railways, which discouraged exporters during the period.