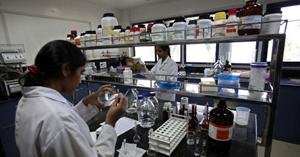 Creating global capacities is the only way to win back ground lost to China is bulk drugs. This was a clear message from the Indian pharma industry on the eve of a fresh Union Budget.

In its latest July 2014 report on the Indian Pharmaceutical industry, the Associated Chambers of Commerce & Industry of India (Assocham) urges the government to "promote the setting up of vertically integrated manufacturing facilities for essential drugs, at a competitive scale."

This was a point made by the Indian Pharmaceutical Alliance (IPA), an association of some of the leading Indian pharma companies, earlier too when its president - and chairman of Dr Reddy's Laboratories - Satish Reddy called for setting up "industry clusters" where the government could provide a package of incentives and common utilities to make large scale production facilities at low cost possible.

The Assocham report suggests tapping the "infrastructure of sick PSUs." This, it says, "may be leveraged in this regard, through public-private partnerships." It says: "Utilize capacities of public sector undertakings (PSUs) like Indian Drug & Pharmaceutical Ltd etc that invested in manufacturing infrastructure required for many of these APIs (active pharmaceutical ingredients or bulk drugs) and intermediates."

It further says: "Engage private players to manage operations so that optimal utilization of the existing capacity is ensured.These capacities need to be enhanced in order to achieve economic scale of production." "The government can help set up capacities for these APIs/ intermediates by providing fiscal incentives such as subsidized debt, tax and duty breaks on capital equipment.....Facilitate the establishment of vertically integrated manufacturing facilities by offering incentives to petrochemical and agrochemical companies such as secured committed orders in order to encourage them to set up plants in close proximity."

Also, in a sense, echoing the IPA point, says: "For long term, the government could offer fiscal incentives during the formative years to encourage setting up of large-scale pharma and chemical clusters in close proximity to each other to enable companies to build scale and vertical integration."

The Assocham report also points to other challenges and suggests possible ways forward. For instance, on achieving the goal of universal health coverage for all, it urges the government to use the public-private partnership route.

It says: "There is need to see to it that a good standard of affordable health care facilities is provided to more people, especially in the Tier II and III cities and towns of India. This can be made possible by way of partnerships between the government and the private players, where the government plays the role of a payer and the private players provide the service."

On the slowdown in the clinical trials approval process, it calls for, among other things,  establishing "a regulatory structure which is not only stable, transparent and predictable but also accountable with regular audits and appraisals."

On price control, it seeks, among other things: "A regulatory framework for pricing of drugs so as to ensure availability of required medicines - "essential medicines" - at reasonable prices even while providing sufficient opportunity for innovation and competition." On Intellectual Property Rights (IPRs), it sees the need for "setting up of specialized courts which are equipped to adjudicate upon technical and scientific issues involving pharmaceutical patents."

On FDI into pharmaceuticals, feels government needs to address some grey areas like time frame for FIPB clearance and others but at the same time, says, "present policy on FDI in Pharmaceuticals should be continued with specified riders for approval in case of brownfield investments." Finally, on biosimilars or bio-based pharma products, it seeks clarify on the regulatory framework, export incentives apart from tax and excise holidays.