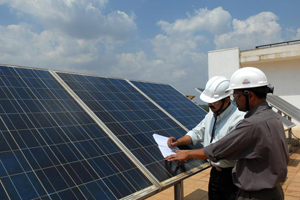 Plans are underway to form a pair of state-owned joint ventures (JVs) that will oversee the construction of renewable energy projects, contributing to India’s energy security and reducing reliance on conventional sources of fuel such as coal.

The oil and renewable energy ministries are working on the proposal, which sees them setting up one JV to oversee large-scale, grid-integrated projects and the other for off-grid projects, according to documents reviewed by Mint.

While one of the JVs will be led by ONGC, IOC will lead the other. The initial funding for the new firms will come from the JV partners that will implement the projects.

The money they put in such projects will be considered part of their corporate social responsibility (CSR) contributions. Under India’s new companies law, corporate entities are supposed to spend a certain percentage of their profit on CSR, essentially charitable activity.

A government official confirmed the plan. “The project report for the joint venture companies has been prepared by Engineers India Ltd. Even some projects have been identified for development by the new firms.

A background note on the same has been prepared,” the official said on condition of anonymity. Spokespersons for IOC and Bharat Petroleum also confirmed the proposal. Queries emailed to the spokespersons for the ministries of petroleum and new and renewable energy, Hindustan Petroleum, ONGC, Oil India, Solar Energy Corp. and India Renewable Energy remained unanswered.

India’s National Action Plan on Climate Change recommends that the country generate 10% of its power production from solar, wind, hydropower and other renewable sources by 2015, and 15% by 2020. India has a power generation capacity of 245,394 megawatts (MW), of which only 13%, or 31,692MW, is contributed by renewable sources.

“The ministry of new and renewable energy resources has the technical expertise. Also, the oil sector, public sector units have large funds available under their corporate social responsibility programmes. This will be ploughed towards the new firms,” said the government official quoted above.

The Bharatiya Janata Party that swept to power in the April-May general election under the leadership of Narendra Modi has stressed the need for reinforcing energy security. The Modi-led government’s energy security plans include harnessing renewable sources such as solar energy, biomass and wind power along with coal, gas, hydropower and nuclear power to bring about an “energy revolution” in the country.

India, which is dependent on imports to meet its energy demand, has an energy import bill of around $150 billion. This is expected to reach $300 billion by 2030, requiring a $3.6 trillion payout by 2030. “My government will come out with a comprehensive National Energy Policy and focus on development of energy-related infrastructure, human resource and technology,” President Pranab Mukherjee told Parliament on 9 June.

“The aim of the government will be to substantially augment electricity generation capacity through judicious mix of conventional and non-conventional sources.”

Developing renewable energy will also help reduce dependence on coal, which is in short supply domestically, requiring imports of the mineral to fuel most of India’s power plants. India is also exploring options to make it compulsory for conventional power project developers to build renewable capacity at the same location, a move that can provide an impetus to ecofriendly electricity. There is a need to integrate conventional and renewable power generation as India’s overdependence on coal needs to be reversed.