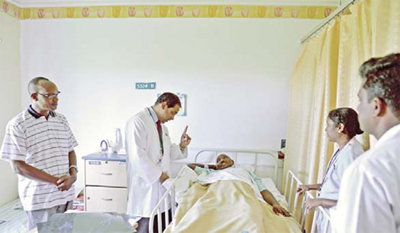 One of the multitude of Indian emigrant doctors, Paul Ramesh moved to Britain in the 1990s, keen to get the best surgical training and earn a generous pay packet.

Today he is still treating Westerners - but in hospital beds back in Chennai, his south Indian hometown in Tamil Nadu state.

“When I came back it was quite exceptional to return. Now it’s the rule,” the 46-year-old told AFP at the city’s Apollo hospital, soon after performing a heart transplant on a woman from the United States.

In Chennai, known as India’s healthcare capital, medical workers describe a “reverse brain drain” as home-grown doctors return from the US and Europe - at the same time as the city develops as a top budget destination for medical tourists.

Traditionally, drawn to the West to boost their expertise and earnings, doctors also cited tightening salaries under Britain’s National Health Service and increasingly tough US healthcare regulations as factors luring them back.

“The trend is reversing,” said M. Balasubramanian, president of the Indian Medical Association in Tamil Nadu.

“More corporate hospitals are coming up, especially in Chennai. Now (doctors) have an opportunity to use their expertise in their own place… and pull the patients from abroad also,” he said.

Inside the Apollo, with a lobby bustling more like a marketplace than a typical hospital, K.P. Kosygan has just carried out a double knee replacement on an elderly Kenyan patient.

The consultant orthopaedic surgeon came back from Britain in 2011 and said there was “a regular stream of doctors coming back”.

“Certainly when I left India there were not many joint replacement centres or surgeons in India who could train us,” he said.

Now doctors want to “share our experience we have gained across the globe,” he said - adding that many were also pulled back to look after ageing parents, in a country where family ties are paramount.

As well as treating Indians, Kosygan said he now treats patients “from almost every corner of the world” who are drawn by the cheap costs.

Patients Beyond Borders, a US medical travel resource, says the cost of certain Indian medical procedures can be up to 90% lower than in the United States, making it one of the cheapest places for treatment.

While most patients come to India from the Middle East, Africa and other parts of Asia, interest from America is growing, said Patients Beyond Borders CEO Josef Woodman.

Among those to make such a saving was Doug Stoda, who travelled to Chennai from the United States for a specialised hip procedure by an Indian surgeon who learnt the technique in Britain.

Stoda’s wife Ann said it was a “big deal” for them to travel to India, having never previously been outside North America, but she said they had “a very good experience”.

“We just had to get to the airport in Chennai and they had everything set up,” she told AFP by telephone from their home in Wisconsin.

At Apollo, various translators are present to deal with foreign patients who number about 70,000 a year, the hospital says.

Country-wide, medical tourism is expected to see a more than 20% annual growth rate between 2013 and 2015, according to global consultancy firm RNCOS.

Many patients come from countries “where they do really require quality expertise at a more affordable price,” said Anto Sahayaraj, 42, who returned from New Zealand in 2012 to work at the Frontier Lifeline Hospital in Chennai.

For all India’s advances on the global stage, doctors emphasised ways in which the country’s healthcare system is still sorely lagging.

N. Ragavan, a consultant uro-oncologist specialising in prostate cancer, returned to India from Britain last year and pointed out the “million-dollar difference” between the two countries.

While Britain enjoys universal healthcare cover, many Indians struggle to pay for quality private treatment, while public services are poorly funded and governed.

“Financial affordability is the biggest problem that India faces,” said Ragavan, 41, who hopes the country’s low health insurance cover will grow substantially over the next decade.

He said the benefits of working in one of India’s corporate hospitals include speedy medical investigations and hardly any waiting lists.