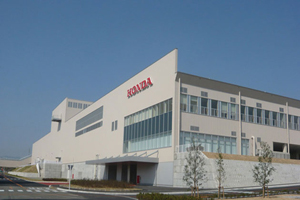 Japanese car giant Honda plans to nearly double sourcing of auto components, including engine parts, from India to over Rs 800 crore during 2014-15.

The company's wholly-owned subsidiary Honda Cars India Ltd (HCIL) is also planning to double exports of vehicles from the country to other parts of the world.

"We are targeting to increase our component exports and it will be nearly doubled. It will cross Rs 800 crore during the current fiscal," HCIL Senior Vice President (Marketing and Sales) Jnaneswar Sen told PTI here.

The company had clocked a revenue of Rs 420 crore from export of components in 2013-14.  HCIL exports different components, including crank shaft, cylinder head and transmission, from its manufacturing unit at Tapukara in Rajasthan to other global subsidiaries of Honda in markets such as South East Asia, Latin America and the UK.

Talking about vehicle exports, HCIL Senior Vice President and Director (Sales and Marketing) Shigeru Yamazaki said: "We are looking to double car exports from India during this financial year. It should cross 10,000 units in 2014-15."  The company had shipped around 5,500 vehicles last fiscal to mainly South Africa, besides Nepal and Bhutan.

HCIL exported its small car Brio and sedan Amaze.  Honda has also started selling the India-made City in South Africa.  When asked if the company's upcoming MPV Mobilio will also be exported, Yamazaki said: "Yes, Mobilio may also be exported. It will depend on demand. However, our priority is India."

The company will launch the seven-seater Mobilio in July in both petrol and diesel options in India.  Earlier, HCIL had said it would increase output from its Tapukara plant by starting a second production shift in seven to eight months to help meet its target of an almost 50 per cent jump in sales to 2 lakh units in 2014-15.

The company may also consider ramping up the installed capacity of the plant in the next two-three years as it targets sales of 3 lakh units a year by 2016-17 as part of its aim to sell 60 lakh vehicles globally in the same period.

Honda currently rolls out 60,000 units a year in one shift from the 450-acre Tapukara facility. The total installed capacity of the plant is 1.2 lakh units in two shifts.  HCIL also has a facility at Greater Noida in Uttar Pradesh, which can produce 1.2 lakh cars every year.