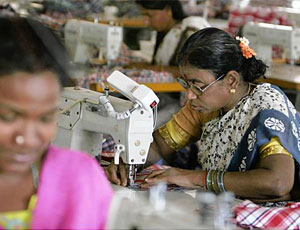 According to new data from the Apparel Export Promotion Council (APEC), India’s textile exports were valued at over US$40 billion in 2013. China, the world’s number one textile exporter, valued its exports at close to US$274 billion – close to seven times that of India

India’s share of global textile trade increased by close to 18 percent in 2013 from the previous year according to the new data, enabling it to capture a significant portion of the global textile market, which is estimated to have grown by 6 percent last year.

India’s readymade garment industry in particular experienced the most significant growth, with a 23 percent increase in the export of shirts, trousers, skirts and other products last year. In readymade garments specifically, India ranked sixth globally last year with exports valued at US$16 billion – accounting for around 40 percent of the country’s total textile exports.

“This growth is phenomenal as the global textiles growth rate is only 4.7 percent compared to India as it has registered the growth rate of 23 percent, beating China and Bangladesh which have registered 11.4 percent and 15.4 percent [growth rates], respectively,” commented Virender Uppal, Chairman of APEC.

“Despite having slow recovery in U.S. and EU, our biggest traditional markets as well as [the] prevailing global slowdown coupled with sustained cost of inflationary inputs, we made the best possible efforts to reach here. The Government policy of diversification of market and product base has helped us and we ventured into the newer markets, which paid huge dividends. We also leveraged our raw material strengths and followed [and] sustained better compliance practices which attracted the buyers and international brands across [the] globe to source from India,” he added.

“The availability of specialty fabric is a big bottleneck for which we have been aggressively demanding five percent duty scrip for the imports of fabrics. It must be considered favorably by the new government to boost apparel exports,” Uppal explained.

“Rising interest rates is another issue which hampers growth for which we have requested the government for a separate chapter for pre- and post- shipment export credit at a fixed rate of seven percent interest, and to treat readymade garment under priority sector lending,” he added.

In recent years, rising labor costs in traditional textile manufacturing hubs such as China have driven investors and businesses in the textile industry to explore opportunities in other markets such as India and Vietnam.

As the ardently pro-business BJP leader Narendra Modi sails through his first weeks as Prime Minister, many at APEC and in the wider textile industry are hopeful these outstanding issues will be resolved in the near future. Other surprises such as the normalization of trade relations with Pakistan and consolidation of outstanding economic ties with other key markets in the region would provide an additional boost to India’s increasingly-booming textile industry.