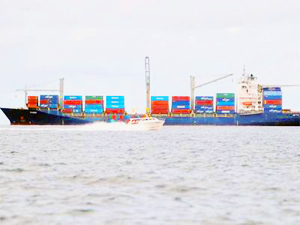 "This fiscal export may reach $350-360 billion. But the government has to take several steps to boost exports further," FIEO President Rafeeq Ahmed said.

He said he met Commerce and Industry Minister Nirmala Sitharaman and apprised her about the country's export scenario.

"The minister wants to discuss all the export related issues with us," he said.

Further, he said that the commerce ministry should fix export target for five years and not annually.

"After five years, our export may reach $750 billion, But there is an urgent need to improve infrastructure and resolve issues related to revenue," he added.

The Ministry of Commerce and Industry is expected to announce the new five-year foreign trade policy (2009-14) after the Budget as it seeks to boost manufacturing and exports.

The FTP is aimed at enhancing exports and using trade expansion as an effective instrument of economic growth and employment generation.