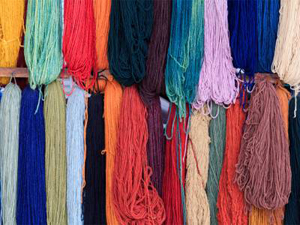 CHENNAI: Lakshmi Machine Works, India's largest and the world's third-biggest textile machinery maker, will focus on new export markets, such as Pakistan, Turkey, Indonesia and Vietnam, to mitigate risk from growing competition in the domestic market.

Competition has been intensifying in the sector with large global players entering the Indian markets and setting up facilities.

Acase in point is Swiss firm Reiter which exited its tie-up with LMW three years ago. The company is expanding its textile machinery capacity in Pune. Similarly, existing players like Kirloskar Toyota Textile Machinery are also expanding capacity. LMW makes spinning textile machines with a capacity of 3.5 lakh spindles and has a market share of 60% market share (by value) and 70% (by volume) in India.

According to a recent report by brokerage Nirmal Bang, the textile industry has announced capital expansion programmes to the tune of Rs 4,000 crore on improving prospects.

"What was a three-player market has now become a five player market now," said R Rajendran, director of finance at LMW. "Of course increasing competition will force us to give up some market share, that is why we are giving more thrust on exports than in the past."

He said local sourcing and manufacturing by its competitors, instead of importing machinery, will add to the pressure and the company will focus on export markets such as Pakistan and Bangladesh, among others. At present, exports contribute 15% of the company's annual revenue of Rs 2,241.62 crore and plans are on to increase the share to over 25% in the coming years.

"Midway through the domestic textile-capex-cycle and with the promise of investment in spinning internationally, LMW is poised for the next upsurge," Amol Rao and Deepak Agarwal, analysts at Anand Rathi Research, wrote in a note to clients.

"Its dominance in the domestic market notwithstanding, we see a renewed thrust on its overseas business in markets such as Turkey, Vietnam and Indonesia."

LMW's products are available at 10-15% lower prices compared with competition, according to Nirmal Bang.