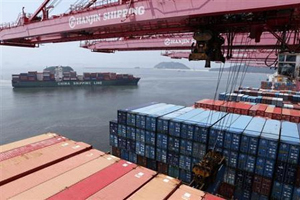 Exports in the first month of the current fiscal aggregated at USD 25.63 billion, while imports declined by 15 per cent to USD 35.7 billion.

Apex exporters body FIEO said that this year the country's exports are expected to register double digit growth and that will help keep trade deficit within the manageable limit.

"The target of new Foreign Trade Policy should be to increase export to at least USD 750 billion by 2019. This would require CAGR of 19 per cent per annum and would need major thrust on manufacturing," it said.

In November, overseas shipments had recorded a growth of 5.86 per cent.

India missed its export target by about USD 13 billion in the last financial year even as the trade deficit for 2013-14 shrank to a three-year low of USD 138.59 billion.

Pharmaceutical and chemical exports grew by 10.4 per cent and 4.13 per cent to USD 1.26 billion and USD 917 million respectively in April.

Electronic and ready-made garment exports too rose by about 4 per cent and 14.3 per cent respectively.

Silver and electronic item imports dipped by 26.5 per cent and 5.38 per cent respectively.