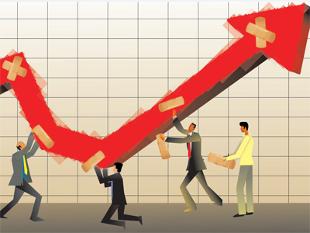 NEW DELHI: Prime Minister Narendra Modi-led NDA government could not have taken charge of the country at a more challenging time - the economic growth has dipped precariously and with two continuous years of sub-5 per cent growth, India is witnessing its worst slowdown in over twenty-five years.

Yet amidst all the gloom, rays of hope seem to be emerging from various areas and most analysts and experts - domestically and globally - are hopeful of an economic turnaround. While the process of getting India back on the path of high growth is bound to be painful, the worst seems to be over and the major sectors of the economy seem to be looking up.

Helping the overall domestic scenario is the fact that global economy is also on its way to making recovery. While Europe is still grappling with its crisis, the US economy is certainly out of the doldrums.

Chetan Ahya, the chief Asia economist and MD of Morgan Stanley at Hong Kong expects India to transition out of the current stagflation environment over the next eight quarters, with GDP growth accelerating from 4.6% in Q1, 2014, to 6.8% in Q1, 2016, and CPI inflation to head towards RBI's comfort zone of 6%.

Has India's time to become an economic powerhouse come? What are these signs of recovery? Are they sustainable? How long will it take for India to move out of the rut of low growth and high inflation? We take a look at five positive developments that have spurred enthusiasm about the economy:

1) Manufacturing & Services sector: The first set of official data for the new financial year shows a marginal uptick in some of the industrial sectors. The eight industry core sector index, -- which includes steel, natural gas, refinery, electricity, cement, fertilisers, coal and crude oil -- was up 4.2% in April 2014 from a year ago.

"With the usual caveat about the core sector data - numbers for April 2013 were revised now, altering the base for calculations - there are some sectoral trends that bode well for the future. The core sector index makes up nearly 38% of the index of industrial production (IIP) but the only thing that can be said about industrial production as of now is that over a third of it has started on a positive note in the new year," said Vinay Pandey in an analysis on ET.

Mythili Bhusnurmath, Consulting Editor with ET Now points to the core sector as an indicator of some revival from the industrial sector. "While there is a caveat that a good core sector growth does not necessarily imply a good IIP number, one has to acknowledge that core sector has grown and that it forms an important indicator of the industry," Mythili told Economictimes.com.

Another factor that according to Mythili will serve to be a positive for the economy is the robust agricultural production that was recorded last year. "Even as fears of El-Nino persist, the agricultural output was robust last year. This will ensure demand from the farmers for manufactured goods," Mythili said.

The HSBC Manufacturing Purchasing Managers" Index (PMI) rose 51.4 in May from 51.3 in April. Growth of both total new orders and new export business accelerated over the month, leading to further job creation across the sector, according to the HSBC survey.

Interestingly, the Reserve Bank of India (RBI) in its monetary policy review has expressed hope of a manufacturing sector revival. "The outlook for the agricultural sector is contingent upon the timely arrival and spread of the monsoon. Easing of domestic supply bottlenecks and progress in the implementation of stalled projects should brighten the outlook for both manufacturing and services," RBI said in its review statement.

"India's services sector also expanded for the first time in nearly a year during May on rebound in new business orders, an HSBC survey said. The headline HSBC Services Business Activity Index was at 50.2 in May, rising from April's reading of 48.5 and pointing to the first expansion of output in 11 months," reported Reuters.

2) RBI indicates rate cut possibility: RBI Governor Raghuram Rajan on June 3 left interest rates unchanged as expected while signalling a possible easing if conditions were favourable. "If the economy stays on this course, further policy tightening will not be warranted," Rajan said in his bi-monthly monetary policy review.

"It's the kind of reassurance that the market has been fishing for, though there are theories on what he could possibly do if a full blown El Nino hardens inflation. The current economic environment has given Rajan the elbowroom to continue with a few structural measures like pruning the statutory liquidity ratio (SLR) -- the slice of net customer deposit that banks have to invest in government bonds - and allowing foreign portfolio fund managers to access the currency futures market," said Sugata Ghosh of ET in an analysis of the policy review.

Acknowledging that lead indicators still showcase sluggishness in the economy, RBI has expressed hope that a decisive election result and sentiment booster would help the country better its prospects.

"The decisive election result, together with improved sentiment should, however, create a conducive environment for comprehensive policy actions and a revival in aggregate demand as well as a gradual recovery of growth during the course of the year," RBI said.

A Standard Chartered research note said, "This relatively dovish monetary policy stance stems primarily from a decisive election mandate and stronger government at the centre. Indeed, the latter has increased the RBI's confidence in terms of inflation management. "It expects the government to take strong action on food supply and to adhere to better fiscal consolidation."

3) Corporate investment revival: Back in the game with Modi Sarkar in the saddle, India Inc seems to be rediscovering some of its spunk. While some companies are readying to hive off assets to get fitter, others are aiming to invest in foreign firms.

An investment cycle revival is likely with corporates hoping for some big-ticket measures and faster government clearances. The ascension of Narendra Modi to power has already resulted in an uplifting of the entrepreneurial spirits, which, coupled with decisive decision-making, should translate into faster growth, ICICI Bank Chairman KV Kamath has said.

"The first thing that needs to be looked at is getting the investment mood in the country right. Get the mood of the people right and create a momentum. It is already on (the) way. I have started to speak with entrepreneurs and I haven't seen such a mood change in the past four years. I saw a mood swing in 2009 after the 2008 challenge (global financial crisis) we had. This is a much bigger mood swing," the veteran banker said.

Cyril Shroff sees a return of the investment cycle across all sectors. "The inbound M&As will see a spike in Modi regime. Corporate India is back in the mood for IPOs & QIP," he told ET Now.

4) Dipping CAD & exports pick-up: India's current account deficit plunged to an unbelievable 0.2% of the Gross Domestic Product in the March quarter, from 3.6% a year ago as imports crashed due to curbs on gold imports.

India's weak external position, which led it close to the brink of a sovereign rating downgrade and pummelled the Rupee last year, is improving, though with some harsh administrative measures such as making gold imports expensive.

Till last year, CAD had been a major economic worry for both the government and global brokerages, who had highlighted that a ballooning deficit would be detrimental for India's growth outlook. However, with stringent measures having been taken to check the deficit, RBI itself admits that the CAD has narrowed down sharply. India's exports grew 5.26% in dollars terms in April 2014 from a year ago, reversing two months of decline.

"For the year 2013-14 as a whole, India's CAD narrowed sharply to 1.7 per cent of GDP, primarily on account of a decline in gold imports, although other non-oil imports also contracted with the weakening of domestic demand, and there was some pick-up in exports," says RBI.

"The sharply lower print is largely in line with expectations, benefiting from the continuation of restrictions on gold imports as well as muted imports of capital goods following weak investment activity," said Aditi Nayar, senior economist at ICRA, the Indian unit of Moody's Investor Services.

5) Stable government at the centre - Reforms expected: In a country where economic decisions are largely dependent on political bandwidth, a strong and decisive election mandate is being seen as a big boost for the economy. "A stable government at the centre is a factor that one cannot dismiss. Whether the same will translate into better decision making needs to be seen," said Mythili to Economictimes.com.

"The government needs to get the fiscal house in order. This does not necessarily require an expenditure cut. We need to make sure that expenditure is reordered to more productive tasks such as building roads. Roads and infrastructure building has a huge direct and indirect impact in terms of jobs and ability to transport," Mythili said.

"There are a lot of food grains, agricultural stock that is rotting. Roads will ensure accessibility and faster transport. We need to cut down on subsidies," Mythili feels.

Crisil is of the opinion that a revival is on the cards. "In FY15, under the assumption of normal monsoon, we expect GDP growth to rise to 6%. This will be led by higher industrial growth driven by infrastructure projects, many of which were cleared last year," it says. "But if monsoons fail - the Indian Meteorological Department has assigned 60% chance of El Nino phenomenon occurring this year - GDP growth could be lower, at 5.2%," it adds.

Ahya of Morgan Stanley expects a steady pace of implementation of policy reforms, which will lay the foundations for India's real GDP growth to move higher to an average of 6.75% over the next 10 years. "If our projections were to come to fruition, India's economy would pass the $5-trillion mark by 2025, a feat that has been achieved by only the US and China thus far, and would lift India to be the fifth-largest economy (from 10th currently)," he says.

RBI has maintained its growth outlook for the current financial year, citing the possibility of a balancing act between monsoon risks and government measures. "Contingent upon the desired inflation outcome, the April projection of real GDP growth from 4.7 per cent in 2013-14 to a range of 5 to 6 per cent in 2014-15 is retained with risks evenly balanced around the central estimate of 5.5 per cent," RBI says.

"The outlook for the agricultural sector is contingent upon the timely arrival and spread of the monsoon. The resumption of export growth is a positive development and as world trade gathers momentum, the prospects for exports should improve further," RBI elaborates.