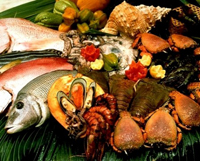 In a good news for Indian economy, the exports of marine products by India have reached an all-time high of US$ 5 billion.

“During the financial year 2013-14, exports of marine products reached US$ 5007.70 million. Marine product exports crossed all previous records in quantity and US$ terms,” an official spokesman said.

Compared to the previous year, seafood exports recorded a growth of 5.98 % in quantity and 42.6 % growth in US$ earnings respectively.

“The unit value realization also reached to record high from USD/Kg 3.78 during 2012-13 to USD/Kg 5.09 during 2013-14 and recorded growth of 34.55%. The increased production of L. Vannamei shrimp has helped to achieve higher exports,” the spokesman said.

He said  Frozen shrimp continued to be the major export value item accounting for a share of 64.12% of the total US$ earnings. “Shrimp exports during the period increased by 31.85%, 99.54% and 78.06% in quantity, rupee value and US$ value respectively.  There was all time high growth in unit value realization of frozen shrimp at 35.05%”.

The spokesman said fish has retained its position as the principal export item in quantity terms and the second largest export item in value terms, accounting for a share of about 32.97% in quantity and 14.15% in US$ earnings. “Unit value realization of fish also increased by 21.65%.”

“Export of Fr. Squid has shown growth of 15.98% and 10.78% in terms of Quantity in and US$ terms value. However it has shown decrease in unit value realization by 4.48%. Fr. Cuttlefish recorded a growth of 8.34% in quantity.  Dried items have shown a positive growth in terms of rupee value by 21.72% and in dollar terms by 9.86%. Live items exports shown a growth by 16.17%,  and 26.81% in quantity US $ realization value respectively compared to the previous year,” he said.
South East Asia largest buyer of Indian sea food products

The spokesman said South East Asia continued to be the largest buyer of Indian marine products with a share of 26.38% in terms of US $ value realization.