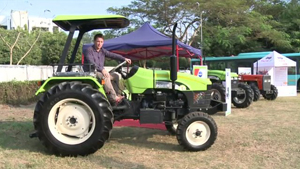 During Burma's years of international isolation the one friend it could rely on both politically and economically was China.

But with the coming of reforms relations with China have cooled - and other countries such as India are sensing a chance to get a stake in what many expect to be a rapidly growing economy.

The Indians are trying to boost their exports to Burma, also known as Myanmar.

The BBC's Jonah Fisher visited a trade fair being held in the biggest city Rangoon, also known as Yangon.