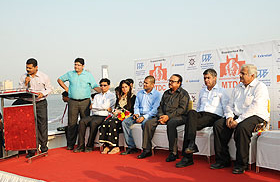 The Maharashtra Tourism Development Corporation(MTDC), in partnership with WB International Consultants and AB Hospitality, has launched the country’s first floating hotel (floatel), named ‘AB Celestial’, in Mumbai. The floatel, which will house two multi-cuisine restaurants including a club lounge equipped with a 24-hour coffee shop, will be docked at the Maharashtra Maritime Board’s jetty at Bandra under the Bandra-Worli Sea Link. AB Celestial will be open to public from August 15, 2014.

Chhagan Bhujbal, Minister for Public Works & Special Assistance Department and Tourism, Government of Maharashtra, while inaugurating the floatel yesterday, said, “The state government has been wanting to launch more attractions in the city, and this floatel is the first step towards making Mumbai a destination for luxury travel. We have a number of foreign tourists visiting the city and this will become a huge attraction for them as it provides a 360-degree view of the city and also of one of the city’s most iconic structures, the Bandra-Worli Sea Link.”

Chetan Bhende, Managing Director and CEO, WB International Consultants, said, “The jetty was a perfect spot to open an attraction such as AB Celestial. It provides a very good view of the Mumbai coastline and of the sea link. This is going to be history in making and I hope that it is received well by everyone.”

AB Celestial, which is made in and imported from USA, is a state-of-the-art, three-tier luxury dining floatel with a sky deck, two galleys and has the capacity to carry minimum 660 guests, who can be accommodated across four tiers. The entire investment for the project has been made by WB International and will be managed by AB Hospitality. MTDC will have a share of ten per cent in the profits made by the floatel.

Manju Bhende, Managing Director, AB Hospitality, said, “Many destinations like Goa, Hyderabad, Bangkok and Singapore have developed the concept of a floating restaurant with dining cruises, special events and parties held at the backwaters, river beds and the sea. We will be additionally developing other water sports activities like jet skiing and sailing. We also plan to introduce a boat post-monsoon, on the lines of AB Celestial, which will be Italian-made and have a capacity of 125 persons.”