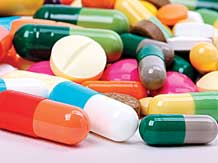 While the overall pharma exports from the country is likely to miss target, exports from Gujarat has, however, managed to clock double digit growth last fiscal.

According to latest data from the Indian Drug Manufacturers' Association (IDMA), India has exported pharmaceutical products including bulk drugs and formulations of Rs 90,649.90 crore during 2013-14, which falls short of the government export target of $25 billion (around Rs 1.5 lakh crore). As per a Ministry of Commerce strategy paper, "As against a target of $25 billion for 2013-14, it is estimated that only $ 17 billion can be achieved - i.e. nearly 70 per cent of the target."

Gujarat contributes nearly 28 per cent to national pharmaceutical exports, said R S Joshi, executive secretary of the IDMA, Gujarat State Board. As per that, the state exported pharmaceutical products worth Rs 25,381 crore, which is higher than last fiscal's figure of around Rs 20,000 crore, when the state enjoyed a 25 per cent share of national exports. India's pharma exports were around Rs 79,184 crore during 2012-13.

There are two major reasons behind the state registering a double digit growth at a time when overall pharmaceutical exports have been on a slow lane as well raising its share in overall exports from the country. One being, small and medium pharma firms from the state have been focussing on exporting to semi-regulated markets. Secondly, industry insiders feel that with the tax benefits in hilly states coming to an end, many units from the state who had set up units in these tax havens, would gradually start focussing on expanding production within Gujarat.

A small firm called Saga Laboratories, which exports oral dosage forms to countries in Africa, Latin America and Commonwealth of Independent States (CIS), now exports almost its entire production, which has grown manifold in the last few years. When it started in 1994, exports hardly comprised 5-10 per cent of its net turnover; and the rest came from sales in the domestic market.