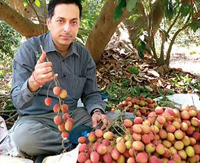 Even as India's mango farmers have been hit because the European Union banned imports of the Alphonso, Dahanu's lychee farmers are rejoicing.

This year's bumper crop - aided by good weather -- means lychees will be exported to the Middle East, Europe and other countries, according to Shahrukh Irani, a farmer in Gholwad, Dahanu. An increased shelf life, thanks to research by the Bhabha Atomic Research Centre (BARC), Trombay, adds to the export quality of the lychees.

Farmers currently harvesting the fruit -- from May 10 to 30 - say the bumper crop is leading them to contact agents in the Middle East and Europe to export the lychees. The last time there was a bumper crop, in 2011, the lychees were exported through similar agents. However, in 2012 and 2013 the crop suffered due to weather and pests and the lychees couldn't be exported. During those years, lychees from Thailand and Israel were preferred by markets abroad.

This year, Dahanu's farmers are 100% sure that their product will be exported, said Irani.

Dahanu is the only place in Thane district where farmers grow lychees. "We farmers are truly rejoicing. This year we have a bumper crop and can now export the fruit to the Gulf, Europe and other countries. We can compete with Israel and Thailand," said Irani.

For two years, the lychee crop had failed due to erratic weather and bats, said Achyut Patil, another farmer from Bordi. "We put nets on all our trees to prevent the bats from gnawing at the fruit, but it is a costly affair," said Patil.

On the BARC research, Patil said, "Lychees have a shelf life of barely a week, and the fruit gets damaged easily due to excessive cold in the refrigerated containers. This makes exporting to Europe, the US, Australia and New Zealand very difficult. But the BARC scientists worked for almost two years with different varieties of lychees and found that lychees exposed to GRAS chemicals and stored at 4 degrees Celsius remain fresh for up to 45 days."

Irradiation, which uses gamma rays, electron beams or X-rays to kill pests, is mandatory for fruits imported by the US, Australia, New Zealand and Japan.

"The lychee fruit ripens on the tree itself. Hence, it perishes rapidly. Irradiation helps the fruit retain its freshness and keeps it safe for consumption," said Dr Sharad Kale, former head of technology (Transfer Department), BARC. The process ensured the fruit's ripeness and colour were preserved for at least a month, he said.

"The BARC's technology has been accepted by lychee growers in Bihar (particularly in the Muzaffarpur and Dhanbad areas) and in Dahanu," said Kale.

Irani, who has around 500 trees spread over 20 acres, said the technology will open doors for the lychees to be exported to far-flung countries, like the US. "Growing lychees is a complicated process requiring extreme caution. The BARC technology keeps the fruit fresh for a long time, which will surely result in a windfall for Indian farmers," he said.

AK Sharma, scientist with the Food Technology Division of BARC, said the lychee technology is a major breakthrough for BARC, which had irradiated the mango years ago.

"Longer shelf life facilitates greater market coverage. The buyer can keep the processed, packed fruit in the refrigerator longer. Exports will go up manifold as lychees will now be able to reach any part of the world," he said. "Several years ago, the BARC had developed a technology that addressed quarantine barriers and helped export the mango all over the world. This technology for lychees is yet another milestone."

Each lychee tree bears around 20 boxes of fruit, wherein each box contains around 300 lychees. In Mumbai, the lychee is sold for Rs 5 a piece. "So we have a good market this year," Irani said.