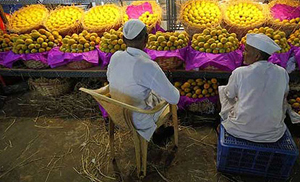 Mango exports from India to the US are likely to increase by 42 per cent to 400 tonnes this year on strong demand, according to the government body APEDA.

Last year, India, the world's largest grower of the fruit, had shippped about 281 tonnes of mangoes to America.

"Mango exports to US would be around 400 tonnes this year," a senior official of the Agricultural and processed Food Products Export Development Authority (APEDA) said.

Mango exports to the US have commenced this month. In the last ten days, the country has exported 50 tonnes of mangoes, mainly 'Alfonso' and 'Kesar' varieties from western India.

The official said that the exports are expected to pick in the coming days with arrival of different varieties of mangoes from various parts of the country.

However, higher exports will depend on supply of quality UP mangoes like 'Dasheri', 'Langda' and 'Chounsa' that will hit the market during monsoon, he added.

Mango exports to the US resumed in 2007. The fruits are exported to the US after the irradiation process, a preservation technology that can reduce the risk of food poisoning and extend shelf-life of food.

Currently, India has only one irradiation unit in Maharashtra with a processing capacity of 10-15 tonnes a day.

Traders and experts said that big volumes of exports to the US cannot take place due to insufficient irradiation centres in the country.

India's overall mango exports in 2014 are expected to be at last year's level of around 60,000 tonnes, while the domestic production is estimated to be around 16 lakh tonnes.