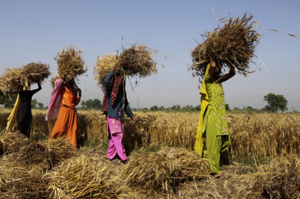 India can achieve 10 million tonnes of wheat exports every year on managing its annual output at 95 million tonnes and reducing spoilage, a study conducted by The Associated Chambers of Commerce and Industry of India (Assocham) said.

The Assocham study quantifies total spoilage at around 40% of India’s annual wheat output worth Rs 50,000 crore due to the dearth of adequate scientific storage together with slow pace of creating fresh warehousing capacity.

“A long-term and stable wheat export policy is the need of the hour as it would go a long way in developing dedicated clientele in the global wheat market thereby helping India in earning much needed foreign exchange, thus issues vis-à-vis storage, domestic consumption, food security needs, population growth and others must be analysed and a pragmatic view should be taken in this regard,” noted the study titled ‘Wheat Economy of India,’ conducted by Assocham.

“India should formulate a strategy to corner about 10% share in the 100 tonnes global wheat market provided right steps are taken to tap this potential in the long run,” said D S Rawat, national secretary general of Assocham while releasing the chamber’s study.

The total production of wheat which accounts for about 35% of India’s foodgrains’ basket may reach 100 tonnes by 2016-17 from the level of about 93.5 tonnes as of 2012-13. However, unless concerted efforts are made to fight the vagaries of weather, risk of pests and diseases and poor productivity in most wheat producing states, it is difficult to achieve higher wheat production targets on a consistent basis, Rawat added.