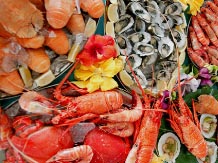 The provisional estimates of the Marine Products Export Development Authority (MPEDA) shows India’s seafood export has crossed one million tonne mark for the first time, earning over $4.5 billion in 2013-14.

According to the provisional estimates, the increase of $1 billion in revenue in 12 months is a great achievement. Export revenue grew 30 per cent in dollar terms. During 2011-12 and 2012-13, earnings were $3.5 billion. In rupee terms, the estimates indicated an earning of Rs 20,000 crore.

Production in Southeast Asian countries had been affected badly due to the spread of a  disease called Early Mortality Syndrome. Supply from Thailand, the world’s second largest shrimp producer, dropped around  50 per cent from the normal   500,000 tonnes a year. Other leading producers Vietnam and Malaysia had also been hit. India could cash on this global situation and enhanced its exports to these countries too.

Processing plants in East Asian  countries  had  to depend on imports from India   in order to meet their commitments with European and US importers. Countries such as Vietnam, China  and Thailand  imported  more shipments from India  last year, mainly for re-export.

Rise in local demand in Korea also caused warming up in global prices,  said Anwar Hashim, a leading exporter and former president of Seafood Exporters Association of India.   However,  USA was the largest market for Indian shrimps,  as the country imported 51.24 per cent of the total Indian shrimp exports.  This was   followed by South East Asian countries (16 per cent), EU (15.82 per cent)  and Japan (4.94  per cent).

Shortage of shrimp due to spread of EMS  also caused rise in prices and, this, in turn, helped the steep rise in dollar earnings, he added. Increase in the production of Vannamei shrimp, rise in the productivity of Black Tiger variety and increase in export of chilled items also helped achieve higher exports, MPEDA said.