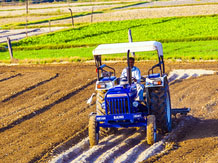 These include raw, semi processed and processed commodities with focus on raw agricultural commodities such as cereals, pulses, oilseeds and fruits and vegetables so that farmers get incentive for grading the produce.

According to officials, specific focus will be on the grade standards of fruits and vegetables and their grading and marking so that more countries recognize the Agmark certification system as already recognized by the European Union.

The grade standards in India are now being harmonized with international standards such as Codex & ISO and standards framed by Bureau of Indian Standards (BIS). Due to global expansion in food trade, the World Trade Organization (WTO) has set as one of their objectives the opening up of trade between countries and aims to address restrictive trade barriers.

Sanitary issues have always been important in global trade and have become one of the most important potential Technical Barriers to Trade (TBT) In this backdrop, apart from gradation of agricultural commodities, Good Agricultural Practices ( GAP) have also made a foray into Indian Agricultural scenario.

GAP takes into account not only the quality and quantity of the produce obtained from a unit area but also in integrating pre harvest practices like soil & water management, nutrient management and pest management, harvesting, post harvest handling and other logistics.

As per recent data from the agriculture ministry, froma net importing country, India is today consistently producing 250 million tonnes (MT) of food grains, 100 MT of rice, 90 MT of wheat, 35 million bales of cotton, and more than 18 MT of pulses among the major crops and cereals.

India has emerged as a major player in the global agriculture market. In the last five years, the country’s agriculture exports have tripled from around Rs 80,000 crore ($ 12.75 billion) to Rs 2.32 trillion ($ 33.99 billion).

Total exports of Indian agri and processed food products from April to August 2013 stood at $ 9.7 bn as compared to $ 8.8 bn during the same period last year, according to the data released by the Agricultural and Processed Food Products Export Development Authority (APEDA).